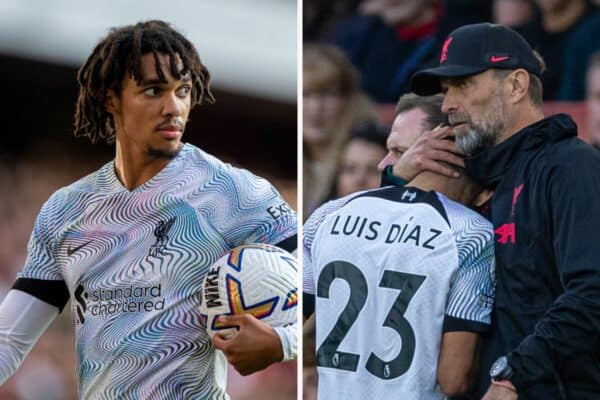 Jurgen Klopp says the injuries sustained by Trent Alexander-Arnold and Luis Diaz “could have been worse”, after the Liverpool pair were forced off against Arsenal on Sunday.

Reports in recent days have suggested Alexander-Arnold is likely to be sidelined for two to three weeks, after a nasty roll of the ankle led to him being taken off at half-time against the Gunners.

Diaz has been less fortunate, with his knee problem likely to keep him out until after the World Cup, although no surgery is required.

It also emerged on Tuesday that Joel Matip picked up a calf problem against the Gunners, and although the injuries to all three will be a bitter blow during a hectic period of the season, Klopp is relieved that the issues weren’t worse.

“I thought we were hopefully a little bit lucky with Trent, because the ankle didn’t look good to be honest,” he told reporters ahead of Wednesday’s Champions League meeting with Rangers.

“Lucho, they say now six to eight (weeks) or whatever, so we will see how long. Lucho looks like a quick healer, but we have to be careful with that.

“It could have been worse as well, the way he moved after the game, and actually Joel just felt a little bit, you make a scan and then he’s out as well.

“That’s not great, but it’s the situation, now we have to deal with it and we will.”

When Klopp was further pressed on the extent of Alexander-Arnold’s injury, he said the right-back may only be absent for a fortnight.

“It’s always difficult to say. Shorter than a month, yeah. Two weeks I heard, but we have to see if that’s right,” he continued.

“That’s the information I got. I’m not sure if I’m allowed to say this to be honest! I thought it was longer when I saw him after the game, but I’ll take the two weeks easily.”

Liverpool have been boosted by news that Andy Robertson, Curtis Jones and Alex Oxlade-Chamberlain are back in training, but Klopp was keen to play down the chances of them coming back into the team any time soon.

Robertson could be involved against Rangers, but Jones, Oxlade-Chamberlain and Naby Keita are among those that remain out.

“They only trained a couple of days. We can not now just put them in,” Klopp continued.

“Robbo is in the squad for tomorrow. Curtis not, Ox not, Naby not. That’s it.

“It’s important that the boys are coming back, but it’s not that they train twice and now ‘here we go’.”