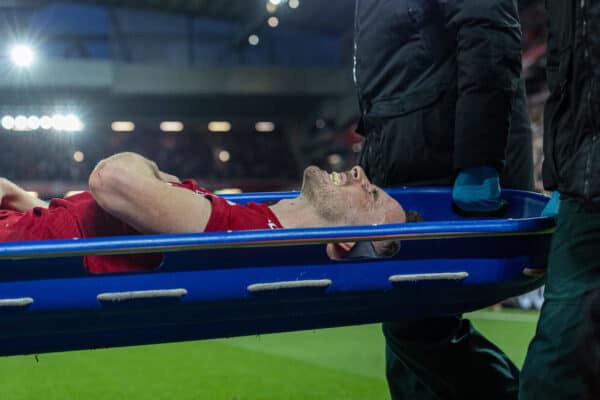 Diogo Jota will miss a lengthy spell after sustaining a calf injury in the 1-0 win over Man City, with Jurgen Klopp describing it as “very sad news.”

Liverpool were seeing out their priceless victory at Anfield on Sunday when, in the sixth minute of stoppage time, Jota went down off the ball.

The No. 20 received treatment on the pitch before being stretchered off by on-site medical staff, with Klopp reflecting after the game that “if Diogo stays down it is not good.”

Having already missed a large portion of the season so far with a hamstring injury, it is a big blow to both Jota and Liverpool, who are now set to be without the Portuguese until after the World Cup.

In his press conference on Tuesday, Klopp explained: “Not good news with Diogo, yes he will miss the World Cup.

“Pretty serious injury in the muscle, calf muscle. Now the recovery starts, or the process starts, let me say it like this.

“That’s it pretty much, that’s the first diagnosis, which was pretty clear. All the rest will follow in the next few days.

“Very sad news for the boy, for us, for Portugal, for everybody.”

Klopp did confirm, at least, that Jota will not require surgery, which is a similar situation to Luis Diaz.

But speaking later he added that Jota will be out for a “long time,” saying “he will not be in for a long time. We talk about months.”

It is a disappointing situation for Jota, who had impressed standing in for Diaz on the left flank, and leaves Klopp seeking a replacement.

The likes of Fabio Carvalho, Curtis Jones and Darwin Nunez could all be considered, while the manager may also ponder another change of system.

Liverpool are due to head to Dubai for a mid-season training camp during the World Cup, which is believed to include friendlies against AC Milan and Lyon in the first two weeks of December.

The season then resumes with a clash at Aston Villa, which is currently scheduled for Boxing Day.