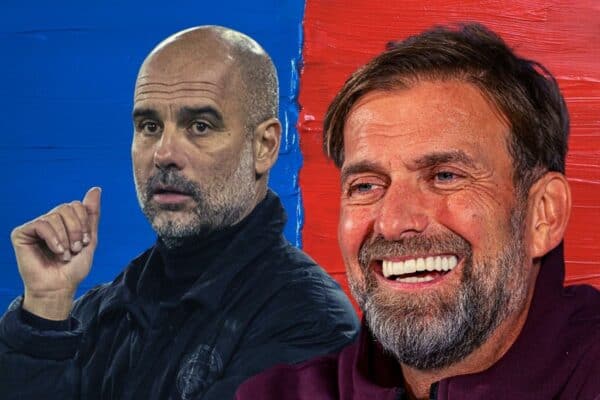 Jurgen Klopp has joked that he’d have preferred Pep Guardiola to have enjoyed a “sabbatical the last four years” as their ‘rivalry’ came under question before Sunday’s match.

Klopp has faced a Guardiola team more times than any other managerial meeting in his career, with 17 of those between Liverpool and Man City.

In those meetings in England, Klopp has won seven, drawn five and lost five, with the two clubs setting the standards in recent years.

On Sunday, though, they head into the league clash in polarising form with City one point off the top and Liverpool 14.

The attention on the clash remains front and centre and so does the Klopp vs. Guardiola rivalry, one the Reds boss speaks of with utmost respect.

And when presented with the information that Guardiola is out of contract at the end of the season, he was asked if he’d like him to stick around and his response was brilliant.

“No, I would prefer Pep does a sabbatical for four years. 100 percent [serious],” he joked.

“Actually, my preferred solution would’ve been he would have had a sabbatical the last four years.”

You wouldn’t be the only one with that thought, Jurgen!

“Honestly, it’s a joke,” he continued.

“I don’t know how often I have to say it, or maybe I don’t have to, but I think it, he’s the best manager in the world.

“He’s proving that all the time, every day. It is special what they are doing, really special and I respect that.

“Not only for the time he is doing it already, but the way he plays, the eagerness he shows. He will never stop. He wants to win each game desperately, each game is the most important – so many things.

“Let me say it like this, I am not [Roger] Federer and Pep is not [Rafael] Nadal but both can be on the highest level and be best friends.

“Pep and I are not best friends because we don’t know each other but I respect him a lot and I know he respects what we are doing as well.

“For a rivalry you don’t need to be disrespectful. Around the games, I would say we have a good relationship without meeting and during the games, we are both competitors.

“So far we did really well in cutting that off from all the stuff [after games], the situation is like it is. No problem with that.

“He’s told me that when we are not in charge of any club we can sit together and have a glass of wine, even though I am not a big wine drinker,” Klopp continued.

“We could do that while I’m working and he’s off I will visit him, we could have that talk, no problem.”