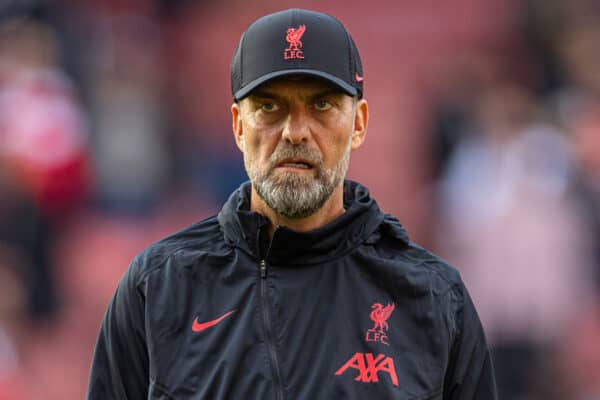 Jurgen Klopp has revealed that he only planned five changes to his side at Rangers, rather than six, but a late issue for Diogo Jota forced another.

Liverpool take to Ibrox this evening with six changes to the lineup from Sunday’s 3-2 defeat to Arsenal, with Ibrahima Konate, Joe Gomez, Fabinho, Harvey Elliott, Fabio Carvalho and Roberto Firmino all coming in.

The injured trio of Trent Alexander-Arnold, Joel Matip and Luis Diaz all miss out, with Thiago and Mo Salah also dropping to the bench along with Jota.

Jota had sat alongside Klopp for press conference duties 24 hours previous, indicating that he would start, but speaking to BT Sport before kickoff, the manager revealed that he was not fit enough to do so.

“It’s [with] half an eye to the weekend,” Klopp said of his changes, with Man City heading to Anfield on Sunday.

“We have to realise we are in the middle of a very busy period. We cannot force the boys through.

“Diogo was not planned, obviously, that’s why he was in the press conference yesterday.

“But then you get a call from the medical department, ‘yeah he can play, but not too long’. ‘Oh great’.

“So then we’d rather start somebody else who can maybe play 90 minutes. That’s why he doesn’t start, but he’s on the bench and he’s available.”

It is not the first time this season that a minor fitness problem has forced Jota out of contention for a starting place, with Klopp revealing a similar situation prior to the 3-3 draw with Brighton.