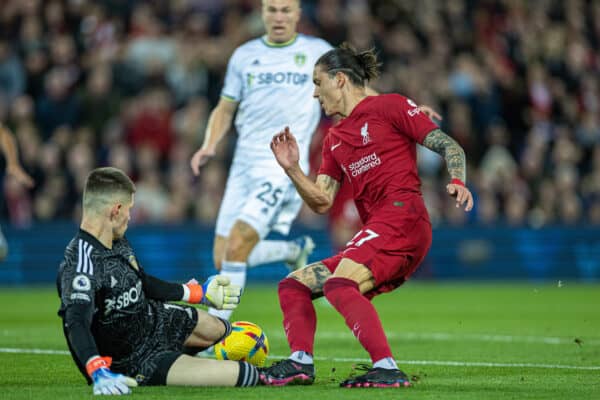 While the fact Leeds outran Liverpool by an extra man on Saturday may be a concern, another key stat from Anfield better explains the 2-1 defeat.

In the wake of the Reds’ latest loss in the Premier League, much has been made of the running stats shared during Sky Sports’ coverage.

Leeds covered 122km throughout the 90-plus minutes at Anfield, while Liverpool managed 111km.

That means, to a man, Leeds ran 1km more than every Liverpool player on average, which has led many to question the desire and energy of Klopp’s side.

But that stat can be explained, at least to an extent, by the fact the home side had 69 percent possession, with 921 touches to Leeds‘ 556 according to WhoScored.

It stands to reason that Jesse Marsch’s side will have run more, given they were chasing the ball throughout, with Klopp bemoaning Liverpool’s inability to control the game in his post-match interviews.

“The boys tried, they really tried,” he told Sky Sports.

“We had a lot of possession, we obviously had big chances which we should use.”

In fact, the efforts of Leeds goalkeeper Illan Meslier offer more explanation for the Reds’ failure to add to a first-half equaliser from Mohamed Salah.

The Frenchman made a total of nine saves on Saturday night, which is more than any other goalkeeper in a Premier League game so far this season:

No goalkeeper has made more saves in a single #PL match this season than Illan Meslier's nine for @LUFC ?#LIVLEE pic.twitter.com/pjxGbt6Jyr

Seven of those saves came in the final 30 minutes, when Liverpool turned up the pressure on their opponents and the likes of Darwin Nunez and Roberto Firmino had big opportunities to score.

In that last half-hour, the hosts fired 15 shots on goal to their opponents’ four, with seven of those on target and four more blocked.

The energy drain played a part in their profligacy, as was evident when Firmino failed to connect properly with a left-footed volley, but Meslier’s heroics cannot be undersold when analysing the result.