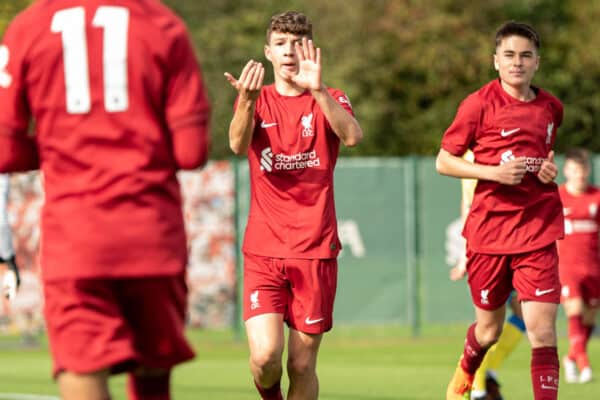 Teenager Lewis Koumas kept up his fine start to the season with his ninth goal in as many games, as the Liverpool under-18s beat Nottingham Forest.

After a change of roles upon his step up to the U18s, Koumas has hit the ground running in a stunning start to the season that has also seen him debut for the under-19s and under-21s.

The 17-year-old started against League Two opposition in his final outing before the international break as the U21s lost at Rochdale in the EFL Trophy, then was back in Marc Bridge-Wilkinson’s side upon the restart.

Hosting Forest at the AXA Training Centre, the young Reds made it three wins from five in the league as they keep up the pace towards the top of the table.

Koumas grabbed his goal within nine minutes, latching onto a rebound to finish well after Trent Kone-Doherty’s initial effort was saved.

The wind affected play as neither side were able to get a grip on proceedings after the opener, with Ben Doak showing promising signs on the right but unable to truly get into the game.

After the break, Forest gained control, with Fabian Mrozek needed for a series of impressive saves to keep out efforts from Detlef Esapa Osong and Jack Nadin.

Liverpool had opportunities to extend their lead late on, notably through substitute Ranel Young, but they were left to settle for a close 1-0 win.

Mrozek should be commended for his efforts in keeping a clean sheet, but the headlines go to Koumas, who is now on nine goals and two assists from nine games, of which he has started seven.