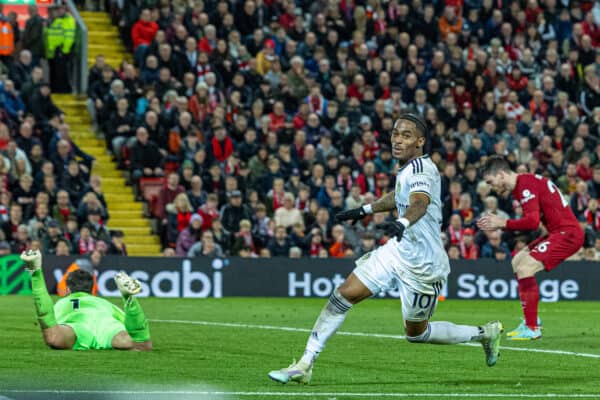 For the second week in succession Liverpool fell to defeat against a side that sat in the relegation zone at kick-off, with Leeds scoring late to inflict a 2-1 defeat at Anfield.

Liverpool have long been their own worst enemy, making their task harder before they’ve even had a chance to acquaint themselves with the opposition – and it was the same against Leeds.

An overhit back pass from Joe Gomez, a slip from Alisson and Virgil van Dijk switching off made for a calamity of errors inside just four minutes, Rodrigo could not believe his luck.

Thankfully the Reds, continuing in the 4-4-2 diamond from midweek, did not take too long to strike back, with a Salah volley at the back post, courtesy of Andy Robertson‘s cross.

That’s seven goals in five games against Leeds – they must be sick at the sight of him.

While back on level terms, Liverpool continued to gift chances to the visitors throughout the frenetic start, easily losing possession and being forced into errors.

Brenden Aaronson struck the crossbar, Darwin Nunez then had a chance one-on-one with Illan Meslier – it was a battle of the soft underbellies with training cones in place of players.

A combined 14 shots on goal, eight for Leeds, came in a first 45 minutes that shone on a spotlight on the shortcomings that have emerged this season.

The break afforded a chance to reset but space to exploit remained available to both teams, as did the lack of quality on the ball to avoid danger and create it.

At the hour mark, Curtis Jones and Jordan Henderson were introduced, the former instantly involved in the most dangerous passage of play of the half, but without reward.

The diamond shape remained, with Klopp saying pre-match that “in this moment, it makes sense because we have a limited amount of strikers.”

The next chance came for Nunez after Salah forced Liam Cooper into a mistake, but Meslier was up to the task from close range as the Reds finally started to create sustained pressure.

But frustration simmered as those attacks broke down, devoid of quality in the moments that needed it most – something said far too often this season.

And Liverpool paid the price, with Crysencio Summerville scoring in the final minute of the 90 to put Leeds into the lead, a side who sat in the relegation places before kick-off and had not won since August.

It spells the end of Liverpool’s unbeaten run with a full crowd at Anfield, one that has been in place since April 2017 and for a run of 81 games. Where to go from here?

In three days’ time, there is another game to navigate – with Napoli the visitors in the final Champions League group game – Liverpool need to win by four clear goals to take top spot.