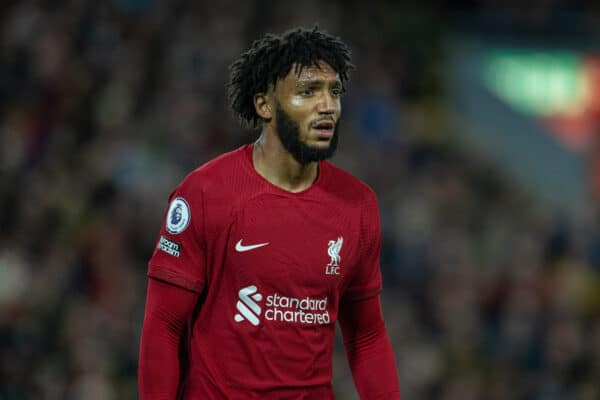 Liverpool 1-2 Leeds: Player Ratings – What the media and statistics say

There were poor individual performances galore in Liverpool’s 2-1 defeat at home to Leeds, on another grim night in their season.

The Reds fell behind to a Rodrigo goal early on, following a disastrous misplaced pass by Joe Gomez, but Mohamed Salah swiftly equalised.

Jurgen Klopp‘s side just couldn’t get going after the break, however, and Crysencio Summerville won it in the dying minutes.

It was a disastrous result for Liverpool and a top-four finish in the Premier League is now looking a million miles away.

Sadly, this was an evening where we have to focus on the worst players.

Gomez (4.6) was the unfortunate recipient of the lowest average at Anfield, as he endured another shaky performance.

The 25-year-old not only gifted Leeds the lead with his aforementioned pass, but his all-round play left a lot to be desired throughout.

Ian Doyle of Echo noted that the crowd were “quickly on his back” and that he struggled to handle it, cutting a nervous presence.

TIA’s Henry Jackson said that Gomez’s displays are “far too hit-and-miss at the moment,” adding that a “lack of concentration” was a constant issue.

The joint-second-worst players on the night were Fabinho (4.8) and Harvey Elliott (4.8), both of whom were part of a poor midfield unit.

The former has fallen off a cliff this season, looking a shadow of the force he was, and FotMob noted that he won just two out of five ground duels.

Meanwhile, Elliott really struggled against an energetic Leeds team, with Doyle claiming he was “on the periphery” all night.

Virgil van Dijk (5.5) didn’t cover himself in glory, especially for the winning goal, which Jackson described him as “weak” for.

In terms of Liverpool’s best player, Andy Robertson (7.2) was the clear standout, proving to be arguably the only individual performing at his best level.

Next up for the Reds is Tuesday’s Champions League dead rubber against Napoli (8pm UK), expect plenty of changes from the manager.