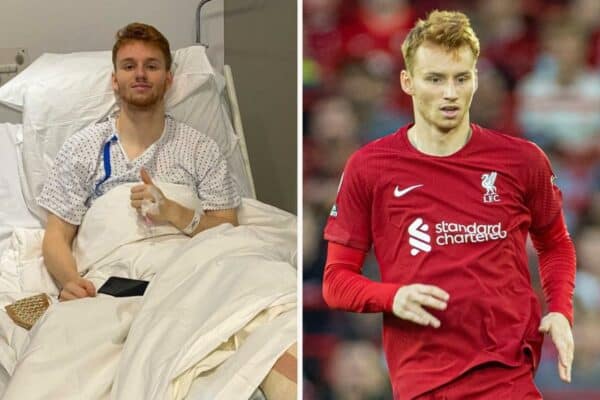 Liverpool defender vows to “come back stronger” after ankle surgery

Van den Berg has been sidelined since the start of October, after catching his left foot in the turf while attempting a challenge in Schalke’s 3-2 loss to Augsburg.

The Dutchman was confirmed to have suffered a “serious” injury by the German club, who ruled their loanee out for the rest of the year, with a view to returning after the winter break.

It was a considerable blow to both Van den Berg and Schalke, with the centre-back having made a strong start to life under Frank Kramer, who is now left with only two senior options at the heart of his defence.

A 4-0 thrashing at the hands of Xabi Alonso’s Bayer Leverkusen compounded their issues, while Van den Berg was preparing for surgery.

The 20-year-old provided an update from his hospital bed on Monday evening, confirming that his surgery was successful and setting his sights on a strong recovery.

“The road to recovery starts now. I will come back stronger.”

Given it is a ligament injury for the Netherlands under-21 international, Schalke will be cautious with Van den Berg’s rehabilitation, with the prolonged break due to the World Cup aiding his situation.

The Bundesliga side only play seven more times before the campaign pauses, though whether Kramer will be in place when his No. 5 returns is questionable, with Schalke currently in the relegation zone with six points from nine games.

According to BILD, the 50-year-old’s departure “seems only a matter of time” unless form improves drastically, with Thomas Reis, the former Bochum manager, poised to take over.

Van den Berg is expected to remain in Germany while he recovers, though he will be permitted to travel back to the Netherlands and possibly Merseyside if he wishes.

A trip back to the AXA Training Centre is likely to be scheduled at some stage, with Liverpool medical staff no doubt eager to assess their loanee’s fitness themselves.