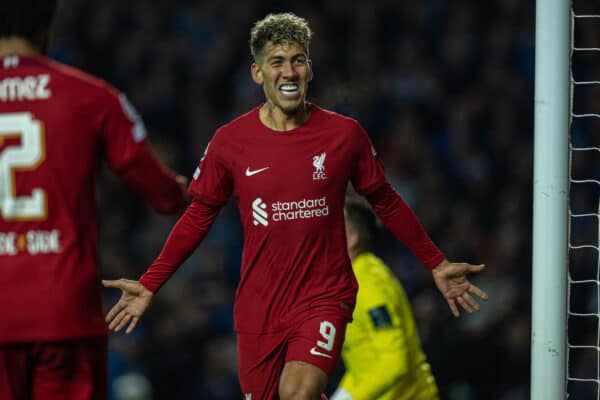 Roberto Firmino was Liverpool’s hero at Rangers, notching two goals and an assist to propel the Reds to a thumping victory, that was well and truly needed.

For the eighth time in 12 matches this season, Liverpool conceded first – it’s more of a surprise when they don’t these days.

The task for Liverpool, therefore, was no surprise either with a comeback required – and there was one man to lead the charge, Firmino.

The Brazilian has been the man in form for Liverpool this season with six goals and three assists to his name prior to the trip to Scotland.

He left Ibrox with eight goals and four assists, a tally that played a pivotal role in Liverpool’s 7-1 win – taking Jurgen Klopp‘s side to within one point of the last 16.

After proving to be a class above those around him during his 73 minutes on the pitch, fans had plenty of praise for the No. 9:

Roberto Firmino has more goals for #LFC than Kevin Keegan, and two more draws him level with John Barnes.

12 more and he goes level with the great Ian St John.

Roberto Firmino, love him. Shown class where others have been lacking. The man in form.

If it wasn't clear, love him. ? pic.twitter.com/BS9mSa8u0D

Of all the players I expected to have a revival this season Firmino would be the last of my list. What a player. pic.twitter.com/InN2fQCefB

Firmino is on one.

Firmino has had a lot of flak over the last couple of years, but imagine where LFC would be this season without him… while others have regressed he is rising to the challenge

Firmino is literally carrying our team. 10 G/A in 12 games. Form is temporary, class is permanent when it comes to Bobby. ??

Lovely finish from Darwin but the vision and execution from Firmino is exquisite. That was 17/18 party Bobby

Roberto Firmino is in the form of his life at the moment. He's now scored eight goals in 12 matches this season, including five in Liverpool's four games since the last international break. #LFC

At 31, Firmino’s role heading into the season was one that was widely questioned but he’s proven to be one of the few shining lights so far, leading the club’s goalscoring and joint-top of the assist charts.

An injury-interrupted 2021/22 season offered Firmino little opportunity to find his feet but having missed just one game so far this campaign, he’s had a reversal of fortunes.

He has an important role to play for Liverpool as they weather the storm, and the stakes are high for the No. 9 on a personal level, with this the final year of his contract and a spot in the World Cup on the line.