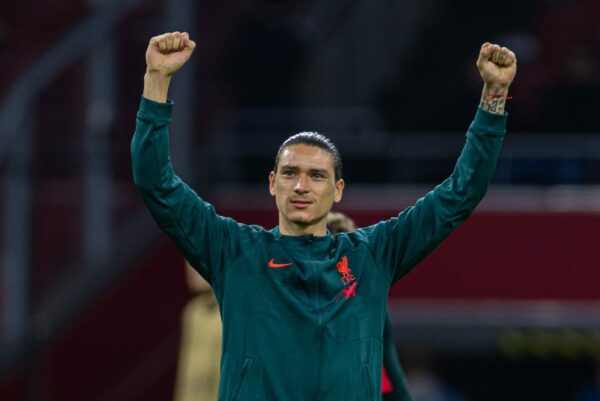 Liverpool fans hail Darwin Nunez after another goal vs. Ajax

Darwin Nunez continues to look the part for Liverpool, scoring on his fourth consecutive start in the 3-0 win away to Ajax.

The Reds knew that a draw or better would seal a place in the last 16 early next year and they did exactly that in Amsterdam.

In truth, it was a disjointed first half by Liverpool, but Mohamed Salah‘s well-taken effort shortly before half-time gave the visitors the lead.

Nunez then made his mark, heading home nicely from a corner, before Harvey Elliott rounded off the scoring with a right-footed strike.

These Reds supporters loved what they saw from Nunez, taking to Twitter to hail his ever-increasing impact.

Nuñez scores in 4 straight starts. Obviously should have had another tonight but positive steps.

Ones a flop & the other is the signing of the season ????

The most worrying thing about a striker you pay loads of money for is when they just don't do anything game in, game out.

Darwin may have looked patchy at times, but he has always been in games and always looked on the verge of creating mayhem.

He's going to be a beast for us.

What do you want from a proper number 9? Goals and Darwin is delivering and his movement will continue to get him into great positions. You're lying to yourself if you think this guy is a flop or will flop…

Darwin just defended the penalty area as a DM far better than Fabinho has done all season, what on earth is this game

Darwin Nunez is the best and worst player I have ever seen man ?

In amongst the crowd of players on the halfway line, Jurgen Klopp has just grabbed Darwin Nunez, engulfed him in a bear hug and slapped his back three times. He's a work in progress, Nunez, but he's getting there. Another pleasing 60 minutes

Nunez may not have been perfect for Liverpool so far, getting sent off against Crystal Palace and taking time to settle, but he is really hitting his stride now.

That’s now four goals in his last quartet of starts and there is an element of chaos about him that must be a nightmare for defenders.

The 23-year-old is raw in certain aspects of his game, but he is rarely out of his matches and is looking more prolific by the week.

Could this be the next great Uruguayan hero at Anfield?