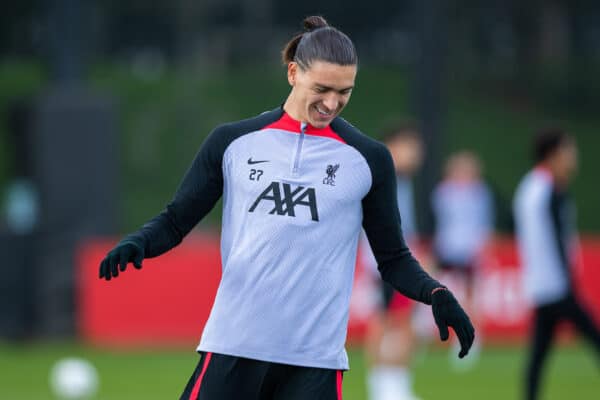 Liverpool will be able to call upon Darwin Nunez for their trip to Ajax on Wednesday night, but there was no sign of Thiago in training on Tuesday.

The Reds can secure a place in the last 16 of the Champions League this week, with a point at the Johan Cruijff ArenA enough to guarantee progress.

After a bitter 1-0 defeat to Nottingham Forest at the weekend, however, Jurgen Klopp will be eager for a much better result to lift spirits again.

Nunez (tight hamstring) and Thiago (ear infection) were both missing at the City Ground, but the striker is now back in contention after joining the group for open training on Tuesday afternoon.

Thiago, however, was not spotted warming up in front of the cameras, suggesting he will miss the trip to Amsterdam.

Also with the squad were Ibrahima Konate and Naby Keita, who resumed full training at the start of the week after respective fitness issues.

Konate is likely to be considered an immediate option for Klopp, but the manager is looking to take a more patient approach with Keita, who has been sidelined since mid-August.

The Guinean cannot, of course, feature in the Champions League yet having not been registered for the group stage, as is also the case with Alex Oxlade-Chamberlain.

Youngsters Luke Chambers and Melkamu Frauendorf were both called up alongside first-team regular Stefan Bajcetic, though Bobby Clark was absent after making the bench in the last two games.

Calvin Ramsay, who is building up his minutes with the under-21s, was also with the squad.

Beyond Thiago, there were four other senior players not involved, with Luis Diaz, Diogo Jota, Joel Matip and Arthur all sidelined through injury.