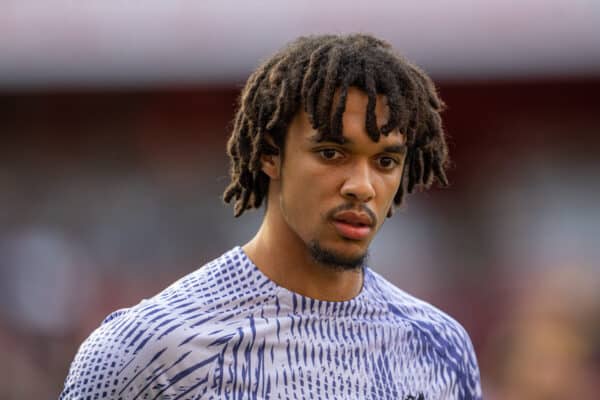 Though Luis Diaz is facing a long-term absence with a knee injury, Liverpool are hopeful they have avoided a serious issue for Trent Alexander-Arnold.

Diaz and Alexander-Arnold were both forced off within the first 45 minutes of Sunday’s 3-2 loss to Arsenal, with Jurgen Klopp not optimistic on the situation when speaking after the game.

The pair underwent initial scans on knee and ankle issues on Monday, with Diaz subsequently ruled out until after the World Cup in December.

That serves as a major blow to Liverpool, with Diaz among the top performers in this frustrating start to the season, but there could be better news when it comes to Alexander-Arnold.

According to journalists on Merseyside, the club are hopeful it is not a serious injury for the right-back, though he is still facing time out.

The Times’ Paul Joyce reports the outlook is that “he could be out for two to three weeks,” which is backed up by the Mail’s Dominic King, who writes that he could be back before the end of the month.

That would still rule Alexander-Arnold out for six games, including the next two Champions League group games against Rangers and Ajax and the visit of Man City this Sunday.

Joe Gomez replaced the No. 66 for the second half at Arsenal and could be an option to start in his place, though Joel Matip is now also absent at centre-back.

Calvin Ramsay is viewed as Alexander-Arnold’s long-term backup, but the Scot is yet to feature since his arrival from Aberdeen due to a persistent back injury, and though he has since returned to full training was not in the squad at the Emirates.

There is more positive news on the opposite flank, with Andy Robertson having taken part in the full session at the AXA Training Centre on Monday.

Robertson could be in line to start against old rivals Rangers on Wednesday night, though there is cause to argue that Kostas Tsimikas deserves to keep his place.