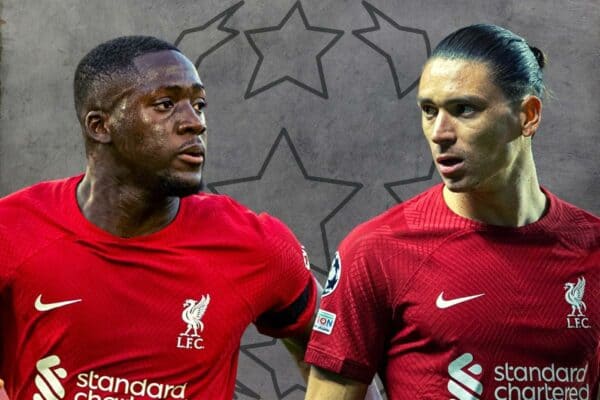 Liverpool lineups vs. Ajax with Darwin Nunez and Ibrahima Konate calls to make

Jurgen Klopp had to make a number of enforced changes last time out for Liverpool but looks set to welcome back at least two senior faces into his squad for the trip to Ajax.

The weekend’s result is not one any of the Liverpool persuasion will want to revisit and, thankfully, the focus can now shift to the Champions League.

Liverpool’s permutations are clear, avoid defeat at Ajax and their place in the last 16 of the competition is secured with a game to spare.

Doing it the easy way has not always been the Reds’ style, though, but it is exactly what is needed for Klopp’s men, for more reasons than one.

And could Wednesday’s match see Darwin Nunez back in the XI and even Ibrahima Konate?

There was a triple boost on the eve of the match but Liverpool’s No. 6 was nowhere to be seen:

There will be changes in the reckoning for this one, it’s just a matter of how many with Klopp setting a trend of five in each of the last three games.

But with Thiago seemingly still unavailable and Keita and Oxlade-Chamberlain ineligible, three may be the number this time around following a four-day break.

Those three changes from the weekend see Liverpool line up like this:

There could also be scope for Konate to slot straight back into the XI after two weeks and three games on the sidelines, taking over from Joe Gomez after four starts and inconsistent form.

And in keeping with the five changes from one game to the next, we could see another alteration to the backline:

The tweaks see the Reds shape up as follows:

Liverpool’s task is clear in Amsterdam and picking up at least one point opens the door for Klopp to treat Napoli’s visit one week later as somewhat of a free hit and a chance for mass rotation.

It’s been said too many times already this season but a response is needed after the latest defeat, but Klopp’s side know how to do that as their three losses so far have all been followed by a victory.

The same again at Ajax, please.