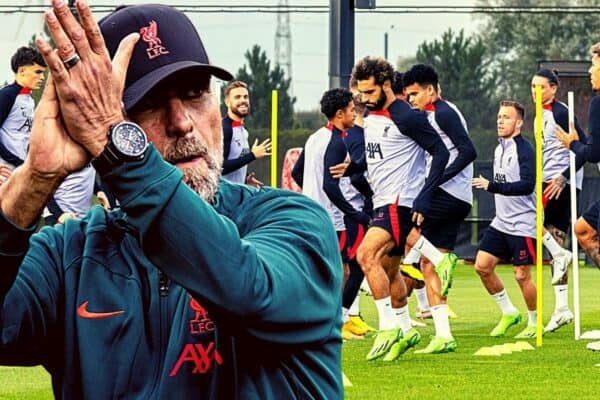 Liverpool lineups vs. Arsenal with 4-3-3 and 4-4-2 options presented

Jurgen Klopp will embrace “unpredictability” when Liverpool visit Arsenal on Sunday, with the boss weighing up whether to stick or twist with his 4-4-2.

In his pre-match press conference on Friday morning, Klopp discussed his shift from a 4-3-3 to a 4-4-2 in the midweek victory over Rangers, and the chances of retaining it.

“It is much more important for us that we become unpredictable again,” he explained, “and we need different systems for that.”

Whether or not Klopp will keep his new system when Liverpool head to the Emirates remains to be seen, but it will force Mikel Arteta to second-guess his plans in the buildup.

From Klopp’s press conference and footage from training on Friday, we know the following:

There are two key factors to consider when weighing up Liverpool’s lineup options for the trip to Arsenal.

Firstly, whether Klopp will build on his successful 4-4-2 or revert to the 4-3-3 he has used for the majority of his seven years on Merseyside so far.

And secondly, whether or not Thiago‘s absence from training on Friday will rule him out of action.

If he does stick with the 4-4-2, there is greater scope to absorb the potential loss of Liverpool’s No. 6, with the following a realistic setup:

However, if Thiago is available and Klopp does change back to the 4-3-3, there is a chance of a more familiar feel to the side:

That would see Liverpool instead set up as below:

With a more compact defence and a free-flowing, goal-hungry attack, the hope is that Klopp will favour his new 4-4-2 setup against the Gunners.

It will be a tougher test than a home clash with Rangers, but it could serve as another platform to work on the system with any necessary tweaks in terms of personnel and individual roles.