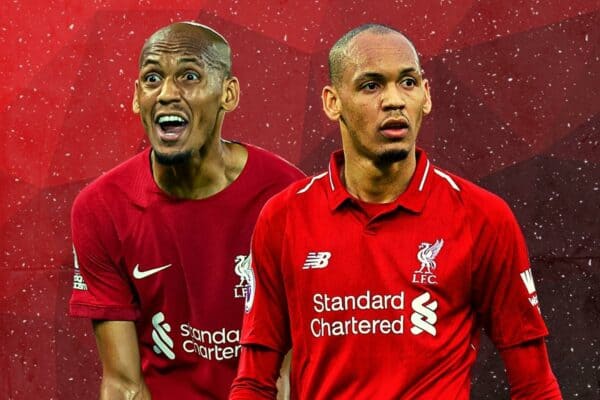 In the words of Jurgen Klopp, “nobody has played the season he should have played yet,” with Liverpool in desperate need of Fabinho being back to his best.

To put it kindly, it has been an uninspiring start to the campaign for almost everybody connected with the club.

It is a group of players who have delivered success beyond our wildest dreams and taken the possibility of a quadruple further than any side in English football history, but living up to their own exemplary standards has been difficult for reasons that even Klopp is struggling to comprehend.

Having been the heartbeat of Liverpool’s midfield since 2018, Fabinho is one of those stars currently failing to hit the heights that we have been spoiled with.

And the success story that he and his elite group of peers have been a part of is what makes this challenging period all the more perplexing.

It was a transfer that put smiles on faces before a ball was kicked, when the club treated us to an announcement video from absolutely nowhere before many supporters had even made their way home from defeat in Kyiv in 2018.

The Brazilian’s £40 million price tag didn’t absolve him of the bedding-in process.

Fabinho had to be patient while the manager made him wait until after the October international break to be regularly involved in matchday squads.

Since then he has become a pivotal component in a system which saw Liverpool become one of the best sides on the planet, a side which delivered the European Cup in Spain and the elusive 19th league title and broke records in the process.

Either side of an ankle injury which sidelined him for two months, Fabinho was a colossus in a season which saw Liverpool take 26 wins from the opening 27 games.

He scored the thunderbolt opener in a 3-1 home victory against Man City on a night many rival supporters began to concede the title just two months in, before going on to prove himself one of the best defensive midfielders in the business.

Playing at the base of midfield in this Liverpool side is one of the most difficult but crucial roles of them all, and Fabinho excelled.

There is an extent to which you can quantify a forward’s season in numbers with goals and assists, goalkeepers and defenders are able to point to clean sheets, but the manner in which Fabinho controlled the space defensively whilst eliciting opportunities for counter-attacking situations was priceless.

He was the man who made the operation tick, and what an operation it was.

Liverpool were relentless and nobody could live with them, and it’s hard to envisage the team setting such an unprecedented pace without the man in the centre of it all.

Klopp acknowledged his attributes in both directions and encapsulated the significance of the role perfectly back in 2019:

His passing range, technical discipline and footballing IQ have been instrumental to everything Liverpool do both defensively and going forwards.

In short, when Liverpool are missing a Fabinho at the peak of his powers in the No. 6 position, the side suffers.

In 2020/21, Fabinho was asked to alleviate the team’s centre-back issues having been decimated by injuries, and despite performing admirably in trying circumstances there was a noticeable lack of steel in the area he vacated.

In the same vein, as Fabinho’s form has begun to dip this season, so have the fortunes of the whole squad.

With 48 appearances to his name last season, it would be no surprise if Fabinho is one of a number of victims of mental and physical fatigue following the most brutal schedule in the club’s history.

A glitch in the matrix

It is a position that perhaps doesn’t carry as much credit as others when performed well, but one which quickly comes under the microscope when you look off the boil.

The expectation is for our holding midfielder to cover an enormous amount of defensive ground, guarding the back four and being in a position to distribute penetrating balls whenever there is an opening.

What we are witnessing is very anti-Fabinho. Losing possession cheaply, being side-stepped and mistiming tackles.

It is a problem which was aggressively highlighted by the manager during the Brighton game at the start of October, when a very public touchline rant followed a failed attempt to prevent a counter-attacking situation.

Liverpool have developed a habit of conceding first, a habit they need to shake, and Fabinho has been culpable on a number of those occasions.

Being on the losing side of defensive battles has been at the heart of the opposition’s ability to swiftly transition and get in behind the back four, an uncharacteristic handicap being applied from the pivot of the midfield.

Players of this calibre don’t become rubbish overnight, but equally, Liverpool aren’t in a position to account for mitigation. There quite simply isn’t time.

In the league, Man City and Arsenal already appear over the hill, and Liverpool are in danger of being cut further adrift by others if things don’t change rapidly.

Overcoming adversity is something which this Liverpool team has repeatedly thrived off.

Fabinho will put things right. He is too skilled and experienced not to, and Klopp doesn’t dish out bollockings to players he doesn’t believe are equipped to respond.

Let’s have 2019 Fabinho back please, sooner rather than later.