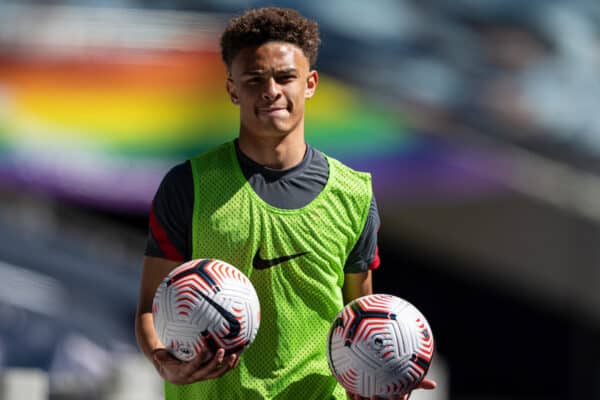 With two more goals in a 25-minute cameo for Welsh side Caernarfon Town, Liverpool striker Fidel O’Rourke brought his tally to five in his last five games.

O’Rourke has settled in quickly in the Welsh Premier League, having made the two-hour journey to Caernarfon Town on deadline day.

The 20-year-old, who has straddled the under-18s and under-21s squads at Liverpool in recent years, still works regularly at the AXA Training Centre, but is a first-choice starter for Huw Griffiths’ side.

He began with a bang with a goal five minutes into his debut, before going four games without one in defeats to Bala Town, Clyde, Connah’s Quay and Pontypridd Town.

Since then, though, O’Rourke has been in unstoppable form in front of goal, with a brace in Saturday’s 3-0 win away to Cardiff Met taking his tally to five in his last five outings.

His first was a deft finish from a long ball, with the next a product of horrific defending from Cardiff Met as he was given acres of space to run through and fire home.

That followed a brilliant bicycle kick in a 2-1 win over Aberystwyth a week previous, along with efforts against Flint Mountain and Flint Town.

So far, O’Rourke has found the back of the net six times in 11 games for Caernarfon Town, but his latest displays have seen him take a big step up.

He is not the only Liverpool loanee to have impressed at the weekend, either, with another commanding display for Blackburn earning Tyler Morton plaudits from supporters:

Back to back away wins and four wins on the bounce! Tyler Morton absolutely unreal in midfield today!?

That was for you Uncle Mick, who we sadly lost on Wednesday ??

tyler morton by the way, wow what a player liverpool have on their hands.

Tyler Morton has been unreal

The 19-year-old has cemented himself as a key player for Jon Dahl Tomasson, and caught the eye again as Rovers sealed a 1-0 victory over Hull on Saturday.

There was another assist, too, for Conor Bradley at Bolton, with the right wing-back laying on his side’s only goal in a 3-1 defeat to Oxford United as he sent Dion Charles through.

Leighton Clarkson started in a heavy defeat for Aberdeen at Rangers, playing the full 90 minutes in a 4-1 loss that saw the opposition put their Champions League misery to one side.

There was also defeat for Marcelo Pitaluga at Macclesfield, with the Brazilian unable to keep Guiseley at bay in a 2-0 loss that knocked the Silkmen out of the FA Trophy.

Adam Lewis played the full 90 minutes as Newport County held Northampton to a 1-1 draw, though, and Max Woltman came off the bench as Doncaster beat Gillingham 1-0.

Game time was hard to come by for five others, however, with Rhys Williams, Billy Koumetio and Owen Beck among those unused by their loan clubs.