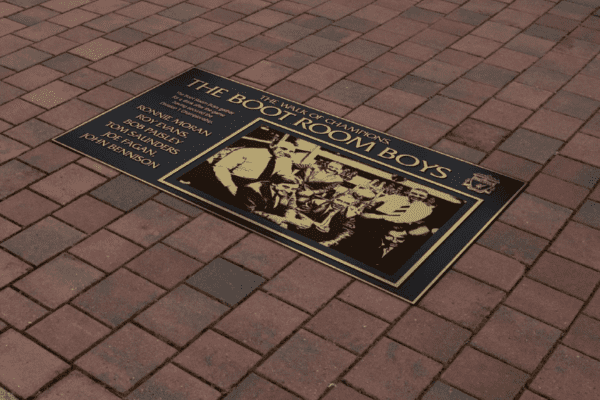 Liverpool to install ‘Walk of Champions’ at Anfield

Liverpool are set to add a ‘Walk of Champions’ at Anfield, featuring former players, managers and key figures throughout the club’s history.

The Reds have submitted plans to Liverpool City Council for the walkway, which will be on 97 Avenue outside the Main Stand.

The bronze plaques will celebrate key figures and moments in the history of the club, with each plaque featuring an embossed picture, a brief description and a QR code linked to further information.

Examples included in the application of those who could feature are former managers Gerard Houllier and Roy Evans, coaches Reuben Bennett and Ronnie Moran, scout Geoff Twentyman, and former club secretaries Peter Robinson and Bryce Morrison.

The walkway will be directly next to the ‘Anfield Forever’ stones which were installed when the Main Stand was first opened.

Eventually, the club hope to install 180 such plaques, almost in a Hollywood Walk of Fame style, with an initially small number added each year in the summer.

Liverpool say that the walkway has “been designed as further extension of the artworks around the stadium, complementing the various statues and fan personalisation that help to draw visitors to Anfield on non-match days.”

Since the opening of the new Main Stand, the club have continued to enhance the area with with additions such as a Bob Paisley statue, the Wall of Champions, and a small statue to commemorate the club’s founder, John Houlding.

Elsewhere, the ‘Anfield Forever’ stones will also be installed outside of the new Anfield Road Stand once complete, and large granite seating as part of the ‘Men who Built Anfield’ will also be added.

The expansion of the Anfield Road Stand is set to be completed next summer, taking Anfield’s overall capacity to just over 61,000.

As part of that expansion, there will be an undercover fan area underneath the new stand itself, providing further enhancements to the matchday experience for supporters.

It’s great to see the club celebrating the unique and storied history of Liverpool FC with these small additions and commemorative areas.