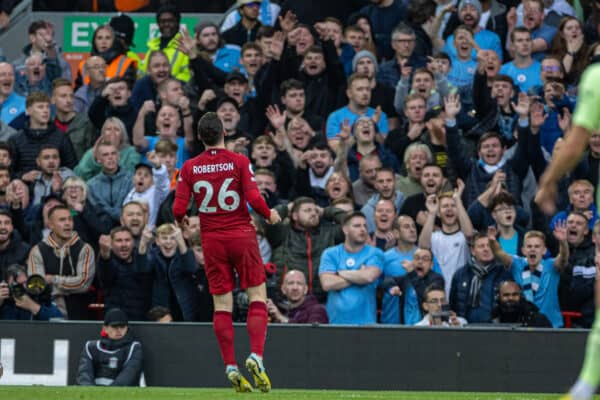 Man City fan condemns “disgusting, vile behaviour of some of our fans”

Liverpool swiftly condemned the “vile chants” that came from the away end during Sunday’s game and now a Man City supporter has denounced the “disgusting” behaviour from some of their fans.

There was plenty of fallout from the Reds’ win over City on Sunday, but none more abhorrent than the chants and graffiti relating to the Hillsborough tragedy that emitted from the away section.

Throughout the game, some City fans were heard chanting “murderers” and also defaced the concourse with similar vile slurs, all of which was rightly condemned by Liverpool.

Man City, on the other hand, chose to point the finger elsewhere, namely at Jurgen Klopp, but one of their supporters has expressed their disgust at what they heard in an email sent to the Hillsborough Survivors Support Alliance.

The email has been shared and reads as follows:

“As a life-long Manchester City supporter, please can I take this moment to express my sincere apologies for the disgusting, vile behaviour of some of our fans on Sunday.

“My friends and colleagues who are also City supporters agree 100% with my sentiments – there should never ever be room for such moronic, cowardly and poisonous conduct and I, for one, would be first to endorse a life-long ban on the perpetrators.

We have received this email from a Manchester City fan who has expressed his and his friends disgust in his fellow fans who sung those vile songs. Thank you for this, its helped restore some faith
If you can't read it it's on our website https://t.co/eiPRk74RNJ pic.twitter.com/QuS187PYir

“The tragedy of Hillsborough still sits heavily in my heart – because, even as a Mancunian, I walked the streets of Liverpool that evening witnessing the awful silent return of Liverpool (and fair play, Everton) fans returning from the semi finals.

“That shocking event could have happened to any club and to any group of supporters.

“Please – if you are able – convey the sentiments of myself, my City-supporting colleagues and – I sincerely hope – the vast majority of decent, honest City fans everywhere when we pass on our deepest apologies.

“Football rivalry is fine … but there are times when the greater family of true football fans should unite … and never walk alone.

“I am not expecting a response – nor should anyone feel an obligation to respond – but if a response is deemed appropriate, please use the email rather than phone contact. Thank you.”

Perhaps Man City as a club ought to take a page out of this supporters’ book, and while they’re at it can help share a brilliant Twitter thread that hit the nail on the head over any and all vile chants.