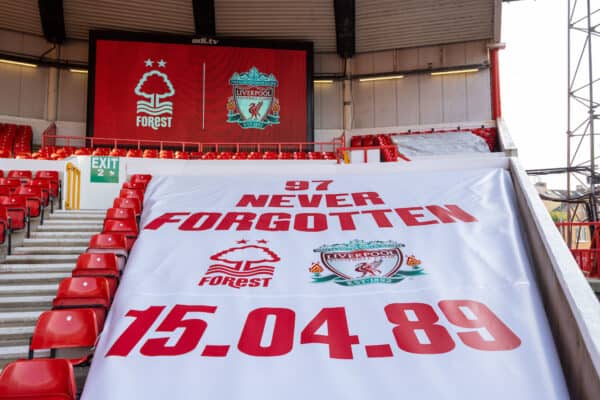 After the events of Sunday’s clash with Man City, a Nottingham Forest fan has brilliantly articulated why there is no place for the vile chants referencing tragedies such as Hillsborough.

Shortly after Sunday’s win, Liverpool condemned the “vile chants” and graffiti relating to the Hillsborough and Heysel disasters that came from the travelling Man City supporters.

It has, sadly, become all too predictable when travelling fans, not all, arrive at Anfield or when Liverpool fans make their way across the country.

It is deeply triggering for those personally affected by the tragedy, with the abhorrent chants distressing and having no place in football or society.

There is no point scoring and it’s not banter, it’s simply classless and vile.

Liverpool travel to Nottingham Forest on Saturday for their first league meeting since 1999 but their second match this calendar year, and a Twitter thread from a Forest fan ahead of the meeting has garnered quite the attention.

Eloquently written, the thread is for all supporters and well worth a read in full.

Had to planned to stay well out of the build up to #nffc v #lfc this time around, but events at Anfield at the weekend prompt this thread. Not expecting to change many opinions, but if I can change just one then it’ll have been worth it. Here goes…

“Not expecting to change many opinions, but if I can change just one then it’ll have been worth it,” @ziggerzagger67 penned.

“The vile chanting about football stadium disasters from Man City fans was grim and makes them look completely classless.

“It’s hard to imagine Saturday’s game passing off without some similar stuff. Hatred of scousers seems to be part of the culture war. ‘They’re anti-monarchy, Scouse not English, left wing’.

“They’re portrayed as victims, to which you’d have to say that having 97 of your friends and relatives illegally killed at a football match, for there then to be a state-organised cover-up and then spend decades being told it was their own fault kind of legitimises that.

Brilliant. Well said. Spot on all the way through. Said it before, can’t we *all* just be a little bit better around all this? https://t.co/odoa53hnZi

A brilliant thread that supporters of *all* clubs should read. The only thing I’d add is that whether you’re “singing about Heysel” or Hillsborough, they’re songs about people who died. Are you really comfortable using that as some sort of weird point scoring thing? https://t.co/GPalQGNxlN

“Inquests into Hillsborough attach no blame whatsoever to the behaviour of supporters. The 97 were victims of an inadequate stadium and bad policing decisions. Fact. Spurs and Leeds fans came close to similar tragedy on the same terrace at previous semi-finals.

“Then there’s the murderer claims. Heysel was appalling and those found guilty, mostly turned in by fellow fans, were dealt with by the law. The short-lived blaming of fans of other clubs was ill judged and soon retracted. No one believes that now.

“There will be people in the ground on Saturday, or watching on Sky, who lost loved ones. There will be people who tried and failed to save their mates from dying, living with all sorts of horrors. Those who still barely keep it together as a result.

“And there are some of us Forest too – there on the day, witness to scenes no one should ever witness. Struggling with images of it, survivor guilt, shame at our own actions or lack of them. There are seriously damaged Forest fans out there.

“On Saturday, no one wants a sanitised atmosphere. LFC fans I know enjoyed the rawness here in the cup and agreed it was *almost* all within acceptable boundaries. Hate them if you must. Sing about hating them. They’ll do it back. That’s football.

“But show some humanity. Whatever you think of the politics, the history, the character, please don’t taunt about a disaster. And remember, the ‘murderer’ thing, intended or not, comes across as Hillsborough related.”