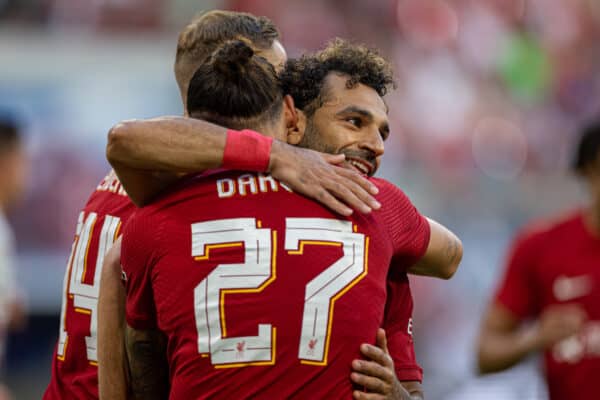 Darwin Nunez has previously admitted to not feeling “completely confident” but the support he has received from his teammates has clearly made a mark on the forward.

The 23-year-old has had his fair share of changes to navigate in his young career, having only left his native Uruguay in 2019 before subsequent moves to Spain and Portugal.

Now he finds himself in England, with a new language to learn, a new culture, a different way of playing and, of course, a fresh set of teammates.

All have their own challenges and arriving as the club’s record signing only adds another layer of complexity and expectation, leading to “a little indecision.”

But his journey so far has been helped by the support he has received from his teammates and Nunez recently singled out Mohamed Salah as someone who left an early first impression.

“When I arrived in pre-season, I was talking to him, we had Fabinho as a translator. In those first few games I was very nervous.

“I had arrived without training and things weren’t going my way. Then Mohamed called me to talk to me, he told me that I had to be calm because I was new, that I was just adapting to the club.

“He told me that he also went through that moment, that when he arrived in 2017, he didn’t know English.

“He told me that I was going to learn it, to be calm now, to do what I did at Benfica, that my potential was important for the team and that I had his backing and that of the captains.”

Very classy from the Egyptian, who has started five games alongside Nunez so far.

The Uruguayan has started to show what he’s capable of, a ball of chaos that now has five goals and has learned from his early mistakes, namely the red card against Crystal Palace.

“I had a bad run, where I was sent off against Crystal Palace, what I did was very bad but it won’t happen again, I’ve already learned from my mistakes,” Nunez said.

“The Premier League is a very competitive league, it is the best league in the world for me. Now I hope to lift my head and move on.”