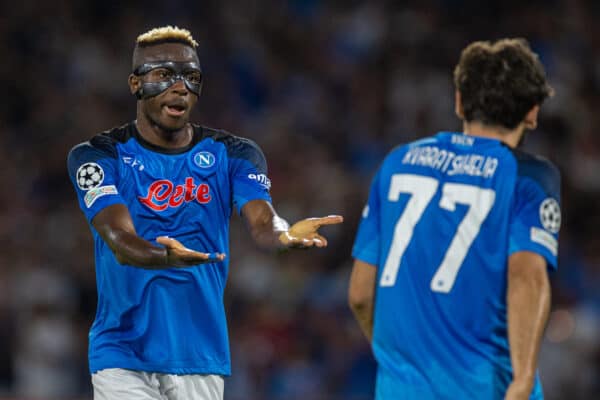 Liverpool face an uphill battle if they want to win their Champions League group, and come up against a Napoli side who are clear at the top of Serie A.

For the Reds to progress to the last 16 as winners of Group A, they will need to win by a margin of four goals or more when they host Napoli on Tuesday night.

After their latest setback in the Premier League the odds of doing that seem even slimmer, particularly as Napoli are in sensational form in both the league and Europe.

They are yet to lose in either Serie A or the Champions League, and on Saturday made it 10 wins from 12 in the league as they brushed aside Sassuolo with a 4-0 triumph.

Luciano Spalletti made six changes from the side that beat Rangers 3-0 in midweek, the big guns returning with Victor Osimhen, Khvicha Kvaratskhelia, Piotr Zielinski and Andre-Frank Zambo Anguissa among those back.

Osimhen opened the scoring in the fourth minute, with Hirving Lozano nodding a cross into his path for an awkward touch and finish.

Trickier from Kvaratskhelia then laid on a second for the striker, who touched home his cutback with ease, before the Georgian made it 3-0 with a drifting run and powerful strike.

It wasn’t until the 77th minute that Osimhen clinched his hat-trick, picking up a backpass and chipping it over Andrea Consigli, but the game was long gone by then.

Napoli stay top of Serie A following their latest victory, with Spalletti able to rest the likes of Kvaratskhelia, Zielinski and Anguissa midway through the second half.

They will be a daunting prospect for Liverpool, even at Anfield, with 21-year-old winger Kvaratskhelia in remarkable shape having scored eight and assisted 10 in 16 games this season.

With both sides already qualified for the last 16, it remains to be seen how Spalletti and Jurgen Klopp will set their teams up on Tuesday.

But even if they go full strength, it is clear that Liverpool will be tested by a scintillating Napoli side who seem unstoppable this season.