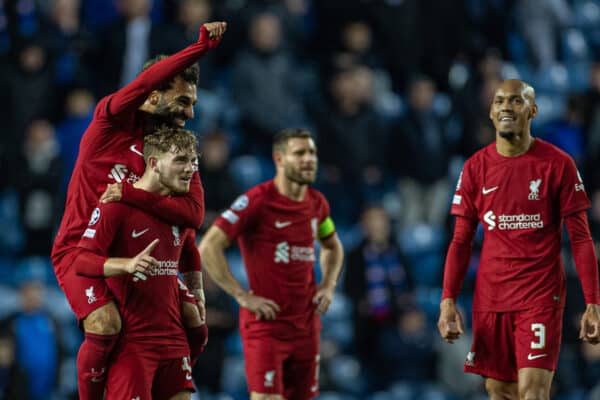 Few would’ve predicted the final scoreline would read 7-1 in Liverpool’s favour at half-time, but Rangers felt the brunt of some built-up frustration, a win that was rightly savoured.

Three goals for Mohamed Salah, two for Roberto Firmino, one for Darwin Nunez and a first in the Champions League for Harvey Elliott, seven unanswered goals after conceding first – again.

But Scott Arfield’s opener wasn’t to be a defining moment for Jurgen Klopp‘s Reds, thankfully.

Instead, the thumping victory was exactly what the manager, players and fans all needed, with confidence and a feel-good factor injected ahead of the weekend.

It wasn’t vintage Liverpool but with all that has unfolded this season, you have to take these small* victories, and that was the feeling on social media after the match:

Well, this is exactly what a team low on confidence needed ahead of Sunday.

Nunez with a second goal in two games. Salah with a six-minute hat-trick and a rest. Thiago also rested. Robertson back on the pitch. Gomez with an assist.

Bobby remains Liverpool's (outfield) player of the season and hopefully that's the confidence that Mo needed to click back into gear—and if Mo's back in top gear, anything is possible even if we've got other issues.

Lots of good things about that second half but this might just be the best… ? pic.twitter.com/KXLKtKP3WI

15min of playing time, hat trick from @MoSalah ! Haters, just continue. Only the opposite will happen. ?

No, I definitely will not calm down after seeing my underperforming club win a Champions League game 1-7 against Rangers.

We’ve been pretty shit this season, so I’m going to absolutely celebrate every win like mad. Up the Reds.

Needed that. Roll on Sunday ?

Great to see Mo back in the goals. Bobby won that game for us though. Vintage.

Don't tell Klopp, but Salah's hat trick may just be the spark that Didi Hamann said Liverpool were lacking.

Ibrox emptying long before full-time to the sound of You'll Never Walk Alone is one of the matchdays to remember forever.

Liverpool have had enough supposed turning points this season to not get too carried with tonight's result, but it never hurts to score seven goals. And if this is the start of them getting Mohamed Salah into scoring positions more frequently then it could be an important moment.

Glad the Rangers fans got to see the real King ??? pic.twitter.com/4CFqgI2k21

That second half was a lot of fun. Get in, Liverpool! Up the reds ?? #RANLIV

The win at Ibrox highlighted all that needs to improve and all that this Liverpool side can still be, with the fluidity in attack during the second half offering plenty of promise.

It may have been just Rangers, but the Reds don’t have the luxury of underestimating any side and that they responded after the break was certainly a welcome sight.

It’s Man City next but mentally, there is no better result to take into that clash than this one.