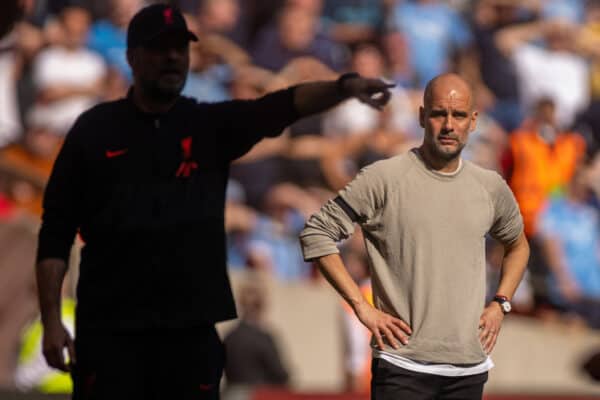 Pep Guardiola not underestimating the same “unprecedented” Liverpool side

Pep Guardiola insists Liverpool’s lowly position in the Premier League means very little as he prepares for another battle with the Merseysiders.

Guardiola takes his Manchester City side, the reigning champions, to Anfield on Sunday looking to extend their 13-point advantage over Jurgen Klopp’s men.

Liverpool have been City’s chief title rivals in recent years but they have made an unexpectedly slow start to the new campaign, collecting just 10 points from eight games.

Yet Guardiola has no doubts about the enduring quality of a side who went close to winning the quadruple last term.

“They won two, lost one by one point and, in the (Champions League) final, they had more shots on target, more chances, more everything than the opponent and they lost.

“For just two little details they could not achieve something that no English team had done. This is the same team with the same manager.

“I pay zero attention about good moments or bad moments. I analyse how the team is and I’m always expecting the best of them. This is how you have to approach it.

“It’s not necessary to tell the players. They know because in the last years we fought for multiple competitions and all the titles and they came close, really close.

“We were a little bit better, especially in the Premier League, but nothing has changed the opinion I can have about them.”

While City’s summer signing Erling Haaland has taken a lot of the headlines this season, scoring a remarkable 20 goals in just 13 appearances, Liverpool’s own star forward, Mohamed Salah, has struggled for form.

The Egyptian served notice that the slump could be over, however, as he came off the bench to score a stunning six-minute hat-trick against Rangers in the Champions League in midweek.

Guardiola said: “These type of players always score goals in their career. Sometimes they struggle a little bit because the team is not at their best but the quality is there.

“If both players (Salah and Haaland) have a half-chance, they can convert it, they are they’re so good.