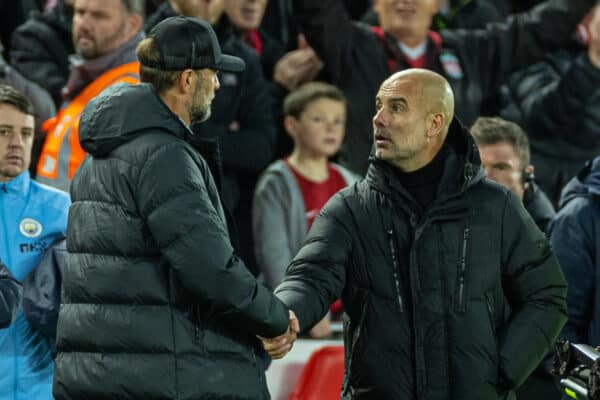 Plenty has come from Liverpool’s meeting with Man City over the last week, on and off the field, and now Pep Guardiola seems to think he believes more in the Reds than Jurgen Klopp.

A week is a long time in football.

It’s a result that keeps Liverpool on 16 points, well adrift of leaders Arsenal (27 points) and City (26), but Klopp had ruled out a title fight before City’s visit to Anfield.

“We are not in the title race. It’s naive to sit here and think that we are nearly there,” Klopp said after the defeat at Arsenal.

There have now been 11 games played and before this latest round of fixtures, which saw Liverpool fall to their third defeat and City notch their eighth win, Guardiola felt he had more belief in the Reds than Klopp.

“It looks like with my statement I believe more in the Liverpool team than their manager,” Guardiola told reporters.

“It’s just 10 fixtures gone, the World Cup in the middle and a lot of games to play, Europe involved and cup competitions involved, injuries involved.

“I said before when we have six or seven games left, yes. When it is just 10 games, one thousand million things can happen.”

It’s certainly true that anything can happen with 27 games left to play in the Premier League season, and Guardiola knows as much after Liverpool nearly overturned a 14-point deficit in 2021/22.

But his words still come across as a sly dig at Klopp, and it didn’t stop there as he was then asked about the German’s comments pertaining to the disparity in spending capabilities.

“Firstly, it’s not a surprise because it is not the first he has said it in the last five or six years,” Guardiola added on Klopp’s words about the financial disparity.

Comments, which by the way, were labelled “borderline xenophobic” by an unnamed City source that was relayed in the Times, a report that is now subject to a legal complaint from Liverpool.