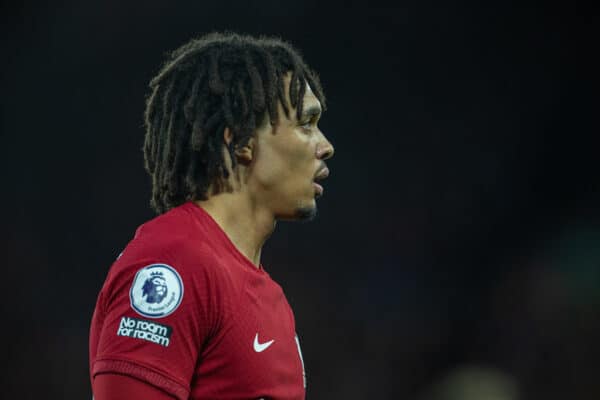 “Pick up as many points as you can” – Liverpool eyeing World Cup break, Trent admits

Trent Alexander-Arnold has admitted the mid-season break for the World Cup will be a timely one for Liverpool, with the Reds in disarray after defeat to Leeds on Saturday.

There are now just four matches until the domestic season grinds to a halt for six weeks, with Liverpool set for games with Napoli, Tottenham, Derby and Southampton before the first-ever winter World Cup gets underway.

After 12 league matches, Jurgen Klopp‘s side have registered just four victories, and are currently closer to the relegation zone than they are the top four.

Alexander-Arnold, who has been at the centre of much of the criticism Liverpool have received this season, has admitted the onus is now on picking up as many points as possible before the break, before the Reds reconvene again after Christmas.

“I think it’s important for us to regroup, assess what’s going wrong,” he told LFCTV at full-time.

“I think right now, it’s kind of, ‘Pick up as many points as you can now going into this break.’ And potentially this break will come at a decent time for us to reset and be able to get our heads straight to go into the second half of the season.”

Next in the Premier League for Liverpool is a trip to Tottenham, who will be buoyed by their dramatic 3-2 comeback victory against Bournemouth on Saturday.

And Alexander-Arnold believes his side must get a positive result in north London if they are to stand any chance of achieving anything this season.

“Clearly as a team something’s not going right, it’s not going as well as we want it to go,” he continued.

“We kind of need to go there and get some points if we’ve got any chance of reaching our aims and aspirations for the season.”