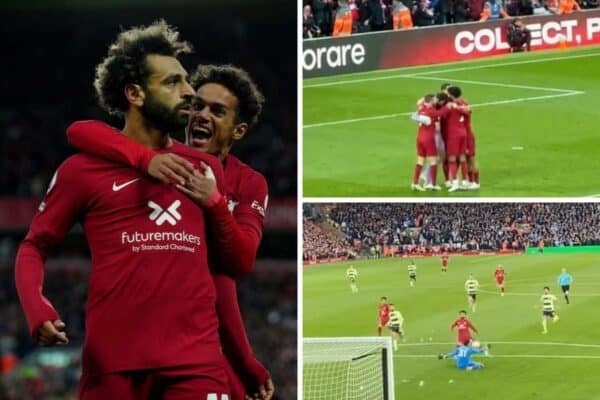 Relive Liverpool’s memorable win vs. Man City from the stands

Anfield rocked to the beat of Mohamed Salah‘s show of quality and Pep Guardiola’s touchline dramatics, with Liverpool harnessing the atmosphere in a memorable 1-0 win.

Few gave the Reds any hope heading into Sunday’s game such was the disparity in form between them and Man City, but Jurgen Klopp‘s side conjured up their best performance of the season.

And it saw them keep City off the scoresheet for the first time in the league this season, with Salah the one to hammer the nail into the coffin with a sublime finish off Alisson‘s pass.

Anfield erupted, at its feral best it squeezed Man City and elevated Liverpool to a level we had yet to see this season, and the view from the stands is a sight to behold.

One must first start with Guardiola’s emotional reaction to City seeing their goal, rightly, chalked off, then calling out “This Is Anfield” to take the decibel level inside the stadium to another level.

And 23 minutes later, Salah had the ball in the back of the net with another show of genius with a sumptuous turn and finish, which was captured beautifully from the stands.

The celebrations were pure chaos and if you wondered where some of the other players were when Salah celebrated at the Kop end, they were with Alisson after yet another assist!

The tactical angle of Salahs goal is incredible.

The back 4 running towards Ali ? pic.twitter.com/sQegIybNUh

Great this, the back four celebrating with Alisson immediately after Salah's goal. pic.twitter.com/ATFFXY7IL4

The atmosphere was frenzied and Anfield was at its glorious best.

What a fans, what a stadium, what a club. #YNWA pic.twitter.com/gDLadymcXl

With Liverpool seeing out the win, You’ll Never Walk Alone swiftly came over the speakers – something you could watch over and over again!

What a night it was for Liverpool after what has been a testing season so far, one can now only hope that this was the performance and result that turns the Reds’ fortunes around.

It was exhausting but cathartic in all the right ways. Up the Reds.