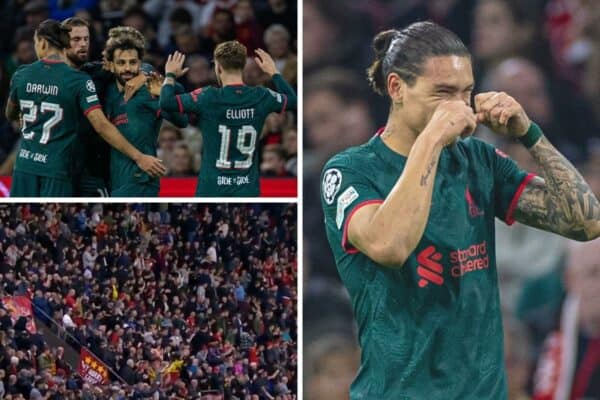 For the sixth time under Jurgen Klopp, Liverpool qualified for the Champions League last 16 and, thankfully, it was without drama on the pitch and an example of how to treat fans off it.

The permutations were clear for the Reds on their trip to Amsterdam, with a point enough to take them to the knockout stages with a game to spare.

“I don’t understand how we can go for a point. We want to win,” were Klopp’s words pre-match, and after a shaky start, that’s exactly what Liverpool went on to do.

Goals for Mohamed Salah, Darwin Nunez and Harvey Elliott rubber-stamped their passage to the next round in a game that offered plenty for fans to talk about.

From Nunez scoring from the start again, the right way to treat fans, the cameo of Stefan Bajcetic and more…

Nunez can be like a box of chocolates, you never know what you’re going to get.

And that is the fun of it all – he was even driving the ball out of defence from his own penalty box at one point at Ajax. A ball of chaos and fans love it:

That tracking back from Nunez ?pic.twitter.com/8oS0oRSKiK

Never have I ever seen a more fun footballer than Darwin Nunez ?? pic.twitter.com/JVCxMuxh6b

This endless Nunez debate on TV… he’s made seven starts and has scored six goals with one assist.

He ain’t perfect, but come on.

Enjoyed tonight’s episode of Nunez. A sitter which hit the post, a mishit cross which ended up as an accidental shot and a goal from the resulting corner.

Nunez is box office, whatever way you slice it.

Another Nunez goal and some comedic relief sprinkled on top, the glory days are back pic.twitter.com/8iRx3YgoPj

The less said about that miss the better…

It’s mind-boggling that away fans even being treated with the respect they deserve is worthy of note, as it should be a given every single time.

But that’s not the case, Paris showed as much. At Ajax, though, it was different, fans were treated like human beings, respected and let out at the same time as the home fans.

It was a lesson to others that simply going to see your football team play is not an invitation to be met by extreme and over-the-top policing and game management.

Due to the exemplary behaviour of both sets of supporters the decision was made not to holdback the Liverpool supporters. Credit to you both. @LFCHELP @SPIRITOFSHANKLY pic.twitter.com/1i2RuA5Ol9

… an ace European away and not just because of the result; also because of how we we were treated. Light-touch policing, friendly stewards, home & away fans free to mix before the game and get the metro back together afterwards, and you could even have a beer during the game.

Heard loads of positive things from travelling #LFC fans about the stewarding and policing tonight. Great atmosphere around the city all day.
Exactly what a European away should be like. Amazing what happens when you treat people with respect.
Paris take note. https://t.co/HvSwR995js

First euro away without a holdback. Not one bit of trouble all day. Both sets of fans having a laugh and a joke. How these trips Should be. https://t.co/RzJBYegSZd

That it’s such a novelty to see law abiding adults happy that they’ve not been hit with batons by riot police, kettled, endured dangerous crowd mgt, aggressively searched, been locked in post game, praise police/stewards tells you what it’s like to follow your club in Europe

This can’t be the exception, it must be the norm. Paris, and others, take the lesson.

A curled assist from the outside of the boot, Jordan Henderson has it nailed down – just ask Man United and Ajax…

Henderson to Salah with the outside of the boot I heard…pic.twitter.com/Gq2LjQhbLj

… key to the turnaround was Jordan Henderson. Took grip of the game with a mixture of calmness and drive and almost single-handedly swung the momentum in Liverpool’s favour. Also stuck in a brilliant assist for Mo Salah’s goal. A true captain’s display.

After two cameo appearances already this season, Bajcetic was handed his third, and longest, spell that lasted 30 minutes and Reds were delighted to see Klopp give him a run out.

Aside from the way the midfielder chooses to wear his socks, that the youngster was handed minutes was appreciated after the way he applied himself throughout pre-season.

And his confidence when coming on was noticed immediately – his shot on goal from distance spoke volumes:

Two little flicked headed clearances by Bajcetic in our box. Our centrebacks got spread apart and he instinctively filled into a central CB area and got his head on two crosses. Fairly standard but still nice to see that conscientiousness from a 17yr old.

Bajcetic is my next big hope. I hope he watches and learns from Fabinho and Thiago and that Klopp trusts him to play more. Even though he's 17 he's got strength and height so he can handle himself.

Bajcetic playing with the tiny rolled-down socks, so you just know he's a baller

Now 18, Bajcetic has been an unused substitute 10 times this season, in addition to his three appearances – a start against Derby in the Carabao Cup looks likely.

Liverpool love a flair for the dramatics, one would say too much, but in contrast to the topsy-turvy season so far, last 16 has been secured with a game to spare.

What a relief that we don’t go into the Napoli game needing a result, instead Klopp can rotate to his heart’s content – a luxury not often afforded.

It’s one massive tick for the Reds, away from home too, and ensures all focus can be setting the right foundations before the World Cup break:

6 – Liverpool have progressed from the group stage in all six of their UEFA Champions League campaigns under Jürgen Klopp, their longest ever run of consecutive qualifications in the competition. Know-how. pic.twitter.com/I4yG47N87S

It feels so at contrast to the season we’ve had so far that we’ve secured last 16 with a game to spare.

You won’t find me complaining.

– Get past Derby in the cup

If none of these happen, go to the Winchester, have a nice cold pint and wait for all this to blow over.

Technically, Liverpool can still win the group but it would require beating Napoli by four clear goals thanks to their head-to-head record – I mean, stranger things have happened…