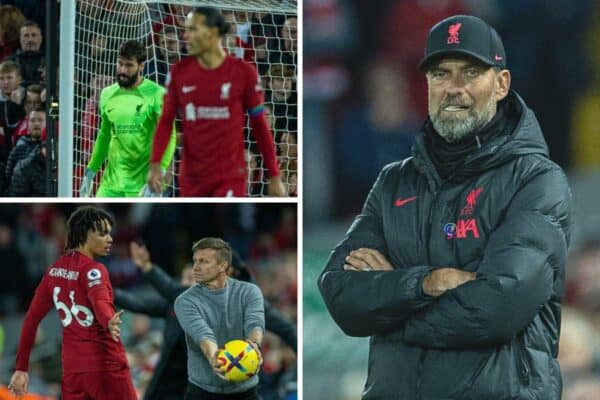 It was a dreadful night for Jurgen Klopp and his players on Saturday, as they were downed by relegation-threatened opponents at Anfield.

The defeat leaves Liverpool eight points adrift of fourth place and in genuine danger of missing out on Champions League qualification if things don’t change.

Here, This Is Anfield’s Henry Jackson (@HenryJackson87) is joined by Red (@TaintlessRed) and John O’Sullivan (@NotoriousJOS) to discuss a shocking defeat and asses Klopp’s current woes.

JOHN: The result and the performances of everyone apart from Alisson and the full-backs made for a miserable night.

I’ll start though with two things I did like – yes, there were a couple in this abysmal overall performance.

Liverpool are still creating chances, even in games we’re losing or drawing. We totalled an xG of 1.95 vs. Leeds. That should be enough to win any game, but our collective defending is atrocious.

I also liked that the full-backs were attacking high and wide, which we’ve rarely seen at all this season but has been a cornerstone of our peak years under Klopp.

They were both involved for the opener, and usually they can create even more opportunities from open play from the positions they found themselves in. We need to maintain that in future games.

Overall, unfortunately, Liverpool are a shadow of the side of the previous seasons. The intensity in the side is gone.

The defenders make basic individual errors in duels, positioning or decision-making – never mind gifting a goal to a Leeds team that lacked confidence prior to the game.

The midfield, which many of us highlighted needed reinforcement, cannot run, especially in a diamond formation where they have to run even more due to the full-backs needing to provide width.

The whole team were outrun by 11km by Leeds and that has too often been the case this season.

HENRY: I’m so sad right now. What has happened?

I’m in total agreement with the lads here – as Red says, there is no specific problem, but instead many going on at the same time.

The lack of legs is clearly the biggest concern, because Liverpool used to be a horrible team to play against and now they’re a dream for opponents.

Maybe last season has just taken the life out of them. Maybe players are tired of the same training methods. Maybe they’re just getting old together.

Whatever it is, we’re in genuine crisis mode now.

JOHN: The Reds’ physical limitations have been clear for all to see this season, but the Leeds game really crystalised it.

They were second to everything and looked painfully slow.

Klopp has changed the shape a lot this season, but a new alignment of the same players isn’t a magical elixir that will add energy and drive to some irreparably maxed-out brains and legs.

RED: The worst part of this result is that we’ve seen these kinds of performances too frequently.

Whether it’s due to fatigue, team selections, injuries, tactics, declining players, failure to reinforce, bad luck, some players with an eye on the World Cup or whatever – Klopp and his coaching staff have been trying in vain to correct the issues.

It feels like one step forward then two steps back.

Nobody should be with their head in the sand about this – Liverpool are in trouble.

HENRY: Even the most optimistic fan can’t claim that this isn’t now a serious problem, with even a top-four finish looking highly unlikely.

I thought Gomez and Fabinho were particularly bad, in terms of individuals, although this is a time to be focusing on the team’s struggles overall.

As for Henderson’s shot in stoppage time, it brought back the PTSD from Lovren’s against Aston Villa at Wembley, and summed up Liverpool’s season so far.

You just can’t believe that this is the same team that came close to winning the quadruple – it’s one of the most spectacular dropoffs I’ve ever seen.

We’re closer to Hodgson’s Liverpool to the class of 2021/22, which is about the most damning thing I can say.

And how much is Klopp to blame?

JOHN: He deserves flak, for sure, but more for decisions taken before this season.

Yes, it’s easy to say in hindsight, but giving Milner and Henderson new deals and not starting a badly-needed midfield regeneration has been so damaging.

He’s tried new things this season and has been proactive at times – while also having one hand tied behind his back with injuries and a comparatively hard fixture start – but he’s reaping what he previously sewed now.

It’s a catch-22 because his man-management and loyalty have been great assets and a big part of the clubs’ success, but that loyalty to certain players is damaging results.

I won’t entertain any talk of his job being under pressure – he’s a million times over the best man for the post – but he will have to be ruthless, starting in January, and start a rebuild.

Optimistically, though, he’s humble enough to learn from mistakes he’s made, and I’m confident he, and by extension, the team, will improve after a physical and psychological break afforded by the World Cup.

RED: Klopp is the best thing to happen to Liverpool football club in 30 years. There’s no doubt in my mind he’s the best person to take us forward.

That doesn’t mean he hasn’t been making mistakes himself this season. It’s not only the players individually or the lack of expenditure by the owners that have been an issue.

An excessive loyalty to certain declining players, an unwillingness to see the need to strengthen midfield until too late and, of course, some of the selections or changes in games haven’t helped.

Klopp needs to find that ruthlessness in decision-making rather than curtailing it for emotional decisions.

His emotions are amongst his biggest strengths and it’s why he builds such strong bonds with his players, but when you view your players like your children, you get that close it’s difficult to let go.

Jurgen needs support. He needs more support from his coaching staff but especially from the ownership. They need to back him and bring in significant reinforcements in January.

Hopefully, the World Cup break also acts as an opportunity to reset while more players get fit.

Liverpool are in a very real risk of not getting Champions League football, which would be a costly disaster. The club need to act, but with Klopp at the centre of the renovation.

HENRY: I couldn’t agree more with both John and Red – Klopp is 100 percent the man to take Liverpool forward.

Yes, he’s not having a great season himself, but who is honestly better than him? Who would be an upgrade?

People will lazily point towards what happened at Dortmund but I think it’s more to do with a lack of recruitment and bad luck with injuries – with new signings and everyone back fit, we will see a very different team.

I hope Klopp is here well beyond 2024, and I agree with Red that the World Cup will come at a great time for him personally.