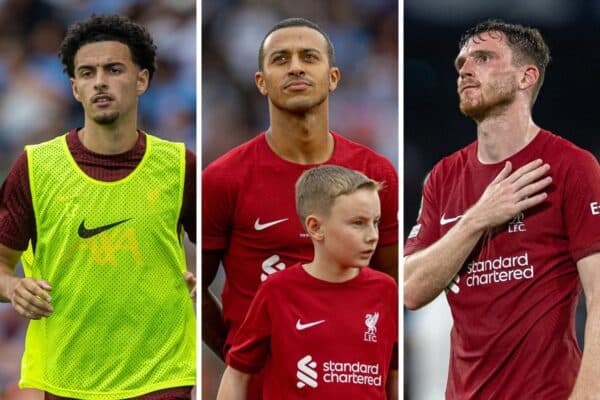 As Liverpool step up preparations for their Premier League meeting with Arsenal, there is concern regarding Thiago‘s availability, but Andy Robertson and Curtis Jones are both closing in on match action.

28 players were pictured in Liverpool training at Kirkby on Friday, but Thiago was not one of them.

We already knew Arthur wouldn’t be there, with Jurgen Klopp confirming the Brazilian was set for a spell on the sidelines in his pre-match press conference on Friday.

Curtis Jones was present, with the Liverpool boss revealing the midfielder returned to training on Thursday, and there was also a sighting of Andy Robertson, although it’s not clear whether he took part in the full session.

There’s every chance Liverpool are just being careful with Thiago, who only returned from a hamstring injury last month, and started against both Brighton and Rangers.

Arthur‘s muscle problem was referred to by Klopp as “the one new injury” in the squad, and there was no mention of any issue for Thiago.

Fingers crossed there’s nothing to worry about!

3 things today: “Defend the sh*t out of everyone!”

If you fancy some Friday night football, QPR vs. Reading is tonight’s Championship fixture.