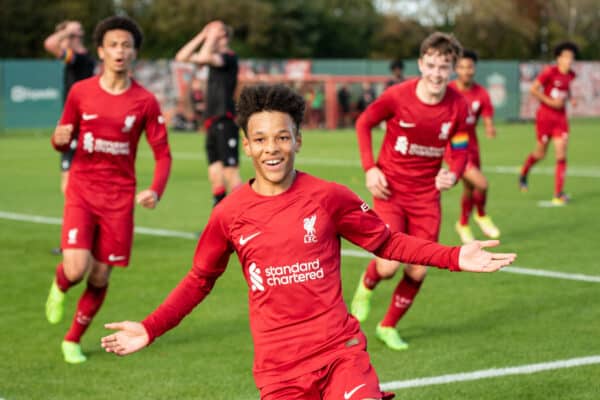 Trent Kone-Doherty twice etched his name on the scoresheet Liverpool under-18s emerged as 3-2 victors in a five-goal tussle with Stoke City.

Kone-Doherty has made a quick impression following his summer arrival, with the 16-year-old certainly not shy in front of goal, much like his fellow teammate Ben Doak.

Less than a week after helping his side complete a comeback against Blackburn, Kone-Doherty proved vital once more for Marc Bridge-Wilkinson’s side having ended the match with a brace.

It was Jayden Danns that opened the scoring for the young Reds, though, with a tidy finish from close range, in what was a high-tempo start.

Liverpool were pegged back just two minutes later thanks to a finish from Stoke captain Nathan Lowe outside the penalty box.

It was then that Kone-Doherty came into the contest, turning his marker inside out to move clear for a drilled finish for 2-1.

All this came inside 20 first-half minutes, and it was not until the final 30 that the game took more twists and turns.

The visitors struck first after the break with another goal from outside the area flying past Fabian Mrozek, leaving Liverpool with 27 minutes to find a winner.

And they did so with time to spare.

It came about after Ranel Young, who was a nuisance all game long, was impeded in the penalty box to hand Liverpool a penalty with ten minutes left in the match.

Kone-Doherty took on the responsibility and saw his effort saved, but he was aware of the rebound and did not make the same mistake twice to restore Liverpool’s lead.

The 16-year-old’s double takes his season tally to six goals in seven league outings, and he was unlucky not to make it seven, as only a last-gasp tackle denied the youngster the match ball.

Liverpool’s 3-2 victory keeps Bridge-Wilkinson’s side in second in the U18s Premier League, behind Sunderland, who have a game in hand, on goal difference.