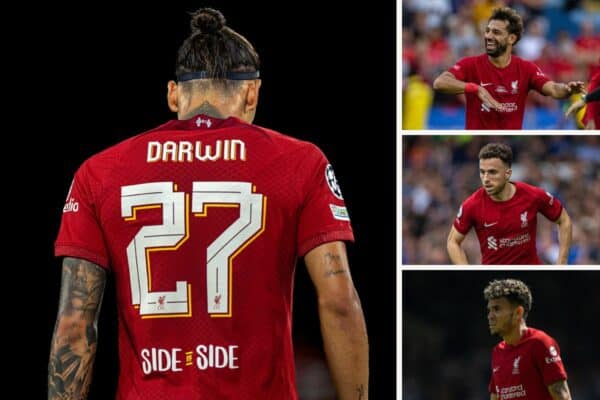 With Jordan Henderson and Thiago the only recognised midfielders in the team, Liverpool look to be setting up in a 4-2-3-1 or 4-4-2 system.

Klopp’s side have been exposed far too easily this season, with Saturday’s 3-3 draw with Brighton the latest of a host of poor defensively displays in recent weeks.

And speaking to BT Sport ahead of his side’s historic all-British clash against Rangers, Klopp explained his decision to move away from his preferred 4-3-3 formation.

“We just thought we had to change and that’s what we did formation wise. Let’s see how it works out,” he said.

“There’s never a perfect time to change, we had to change anyway. We felt it was right. We play so many games, we can’t always push the same boys through. So that’s why we decided like that.”

Despite scoring twice against Brighton, Roberto Firmino is named on the bench, with Klopp shuffling his pack as Liverpool enter the thick of their busy pre-World Cup schedule.

Harvey Elliott and Fabio Carvalho are the other attacking options Klopp can call on from the sidelines, while Ibrahima Konate and Calvin Ramsay are also involved, having recently recovered from injury.

Trent Alexander-Arnold retains his place at right-back, as part of a back four that is unchanged from Saturday’s meeting with the Seagulls.