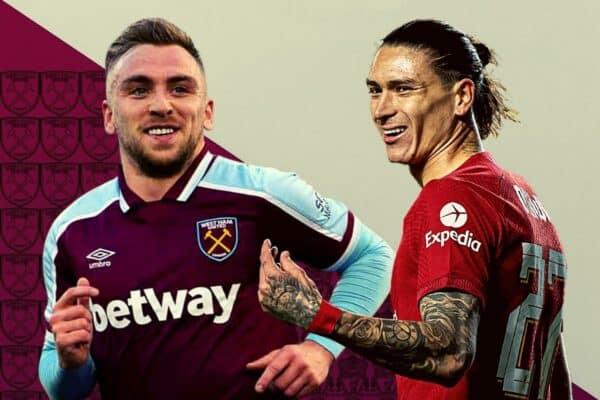 West Ham haven’t yet hit the heights of last season, but Liverpool could be facing them at a dangerous time this week after an upturn in form.

The Reds are still buoyant after their 1-0 win over Man City on Sunday, which felt like a seismic moment in their season.

It is vital that Jurgen Klopp‘s side follow up that victory with three points at home to the Hammers, though, with the two teams meeting on Wednesday.

After a slow start to the campaign, the east London outfit have hit their stride, now with 11 points, with new signings beginning to make their mark.

Ahead of the match, we spoke to James Jones (@ByJamesJones), co-founder of We Are West Ham podcast, to discuss both teams’ seasons to date and the midweek game.

How happy are you with West Ham’s start to the season?

We started very slowly, losing our first three without scoring, but there were still signs that things would improve once many of the new signings had settled.

A recovery has pretty much begun now, with seven points from our last three games, but we’re not back to our best just yet.

I think there are a number of factors.

Firstly, we heavily overachieved over the last couple of seasons when you consider how thin our squad was, so expectations both with our fans and from neutrals were heightened.

But then we had seven new signings that needed to adapt to the team and for most, to English football.

That was always going to take a bit of time but they’re all beginning to have a positive impact on performances and results and now we’re in a good position to get back on track and continue what we’ve achieved over the last two seasons.

The main signing this summer was Gianluca Scamacca because we’ve been so desperate for another striker for so long and he’s been superb for us so far.

Six goals in all competitions from 13 appearances doesn’t tell the whole story, though.

He’s so good at holding the ball up and his link-up play with the likes of Lucas Paqueta and Jarrod Bowen makes us pretty dangerous in attack.

Meanwhile, the likes of Vladimir Coufal and Tomas Soucek have been pretty disappointing for some time now and are the two players being criticised most by fans for their recent performances.

They’re just not having quite the same impact on the team as they did when they both arrived.

Before the Man City game, not great! It’s been a slow start which I think has cost Liverpool a title challenge.

Mohamed Salah has been relatively hot-and-cold, while Darwin Nunez getting himself sent off so early in the season didn’t help matters when you needed him to be a consistent presence in the squad.

That said, the performance against City is evidence that Liverpool can still be considered as one of the best teams in the world on their day.

I think that result will give them the confidence to put a run of results together and climb back up the table.

I think the title has gone, which is a shame, but I think a top-four finish should be a given.

I’m sure Arsenal will fall away eventually, as will Spurs and maybe Chelsea, which will allow Liverpool a route back in.

Which Reds player who you most like to have at West Ham currently?

We tried to sign Nunez on deadline day last January but ran out of time to complete a deal, so he’s one I’d love to have at West Ham.

Had we signed him midway through last season, I think we could’ve gone on to finish in the top six again and perhaps would’ve won the Europa League.

Our record at Anfield is woeful – one win in over 50 years – so I’m not expecting much.

That said, recently we’ve avoided a complete spanking when visiting and have made it difficult for Liverpool to break us down.

I think it will be the same this time around with both teams gaining confidence from previous performances and results.

I’m going to say 1-1. We have enough going forward to threaten any team but defensively we’re struggling with injuries and are unlikely going to keep the likes of Salah quiet for 90 minutes.

A point would be huge for us as we slowly climb ourselves back into the top 10.