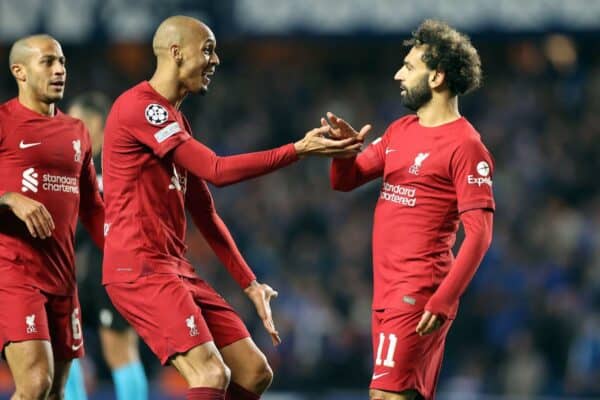 What Liverpool still need to qualify for Champions League last 16

Liverpool’s 7-1 thumping of Rangers has put them on the verge of qualifying for the Champions League last 16, but what do Jurgen Klopp’s side still need to reach the knockout stages?

After four games, Liverpool sit second in Group A on nine points, having lost to Napoli, beaten Ajax at Anfield and secured victories over Rangers home and away.

Napoli are three points above Liverpool at the top of the group, having won all four of their European matches so far this season.

And with two group games remaining against Ajax in Amsterdam and Napoli at Anfield, Liverpool know they are close to booking their spot in the knockout stages, but the job isn’t quite done yet.

What do Liverpool need to qualify?

Put simply, as long as Liverpool secure at least one point from their remaining two group games, they will confirm their place in the last 16.

That is because Ajax will only reach nine points, the total Liverpool are on now, if they win both of their remaining two matches.

One more point will take Liverpool to the 10 point mark, a total that is now mathematically impossible for Ajax to reach, with the Dutch champions currently in third place on three points.

The Dutch outfit have lost the three group games since their opening day victory over Rangers, and Liverpool’s recent victories have made it very difficult for them to secure qualification.

Ajax must beat Liverpool in Amsterdam on matchday five to have any chance of qualifying over the Reds.

That result would take things into the final matchday, where Liverpool will host Napoli and Ajax will travel to Rangers.

Alfred Schreuder’s side would then need to win at Ibrox and hope Napoli win at Anfield, with everything then coming down to goal difference and the head to head record between the sides.

As things stand, Liverpool have a 10-goal superior goal difference to Ajax, meaning there would need to be a major swing for the Dutch outfit to leapfrog Klopp’s side into second.

Can Liverpool still win the group?

Realistically, no. Liverpool would need to beat Luciano Spalletti’s side – who sit three points ahead of the Reds, having won all of their group matches so far – 4-0 in the final group game to beat them on head-to-head.

A win by three goals would see it go to goal difference, and the Italian side are already seven goals ahead of the Reds there.

The other way it could come about was if Rangers were to beat Napoli in the next matchday… which looks highly unlikely!

Getting ahead of ourselves there? The draw for the last-16 takes place on Monday, 7 November – the week after the final group games.

That means teams will know who they will face in the last-16 before the World Cup break. Those last-16 ties take place in mid-February and mid-March.