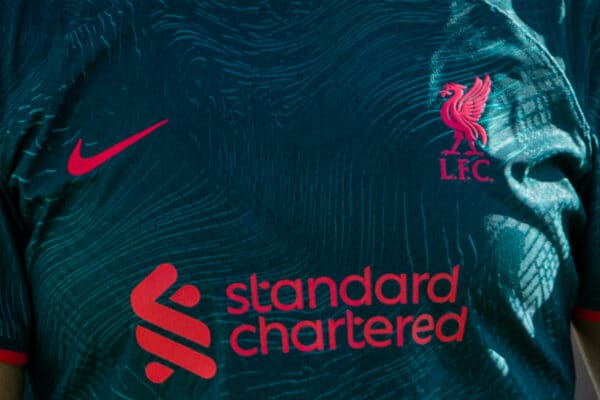 Will we finally see Liverpool’s third kit in action vs. Ajax?

Liverpool have made four away trips since their third kit for 2022/23 was unveiled, but will it finally make an outing when Jurgen Klopp‘s side turn out at Ajax?

The Reds’ full complement of kits from Nike was completed on September 5, with the third edition proving an instant hit with its blend of ‘dark atomic teal and rio teal,’ with ‘siren red’ accents.

Liverpool Women have already donned the kit but it has yet to make an outing for the men’s team, nearly two months on from its reveal.

That could come to an end on Wednesday, though, when Liverpool travel to meet Ajax in the Champions League, knowing they need to avoid defeat to confirm their place in the last 16.

Perfect time for its debut

Ajax’s home kit is a combination of red and white, a pairing that clearly does not clash with Liverpool’s teal third strip.

But that was also the case when the Reds travelled to meet Arsenal and Nottingham Forest in recent weeks, so why will this game be any different would be a valid question.

Well, the promotion for the strip centred around Liverpool’s European heritage and history, with it being a “celebration of the famous flags and banners that have travelled with fans across Europe for decades.”

The third kit, also known as the change strip, has long been a part of the club’s European history and with this being the last away game in the group stage, there’s no better time.

When Liverpool do wear the stip in Europe, it will include the ‘Side by Side’ logo on the back to acknowledge the partnership between the LFC Foundation and Right to Play.

The third kit is certainly an exercise for clubs to make more money, and being worn on the pitch would help them do just that – and maybe return better results than the away kit!

Each time the Reds have worn the dizzying kit they’ve tasted defeat (Man United, Arsenal, Forest) and those of us who are superstitious will be eager to see the change, starting at Ajax.