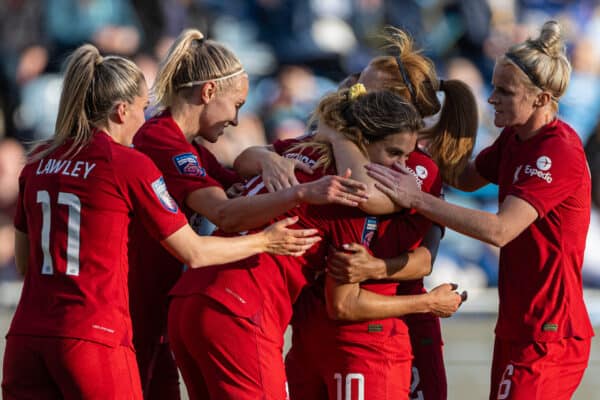 Shanice van de Sanden was the difference maker for Liverpool Women as they fought back to rescue a late point in a 3-3 draw at Brighton on Sunday.

It’s been a tough few weeks for Matt Beard’s side, who travelled to Brighton off the back of five successive league defeats, leaving the Reds sat precariously close to the sole relegation spot.

It is why Missy Bo Kearns’ opener after 17 minutes was met with elation, her first-time finish coming thanks to direct work from Melissa Lawley in the buildup.

Things then took a sour turn for Liverpool with Brighton scoring three goals in the space of just 13 first-half minutes, leaving Beard to take his side into the dressing room 3-1 down.

Liverpool have often been able to keep their opponents from scoring in a hurry throughout the season but it got away with them in the first half on this occasion.

And it was Van de Sanden who helped the Reds dig themselves out of the hole they’d dug, her introduction at the start of the second half providing needed impetus in attack as Beard tweaked his set up.

The Dutch forward has been largely unavailable this season thanks to injury but showed exactly what she can bring to the team in only her third outing of the season.

After building up momentum in Brighton‘s half, Van de Senden finally broke the host’s resistance with a header at the back post thanks to a cross from defender Emma Koivisto.

The scoreline read 3-2 with 14 minutes of regulation time remaining, game on.

Taylor Hinds then struck the crossbar from outside the area before Brighton‘s ‘keeper presented an opening in the box that could not be capitalised on as the clock ticked down.

But Van de Sanden kept her cool, moving to the right flank and delivering a brilliant cross for Furness to emphatically finish for 3-3 – the relief was immediately obvious from Liverpool.

The draw adds a valuable point to Liverpool’s tally, taking them to four and keeping the Reds above Reading and Leicester, they play the former in their next league game.