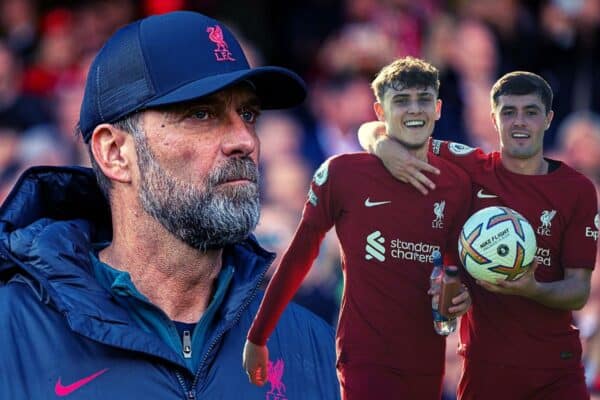 2 Liverpool lineups vs. Derby with chance for Scouse striker debut

Jurgen Klopp will look for a blend of youth and experience as a rotated side takes on Derby in the Carabao Cup, with some exciting talents to feature.

This week brings a welcome change of pace for Liverpool, as they begin their defence of the Carabao Cup at home to League One side Derby.

After emerging from gruelling clashes with Napoli and Tottenham with six points, and with a Premier League clash with Southampton to come on Saturday, there are likely to be wholesale changes in the cup.

However, the absence of at least six players due to injury makes that a tougher proposition than Klopp and his staff would have hoped.

It does, though, hand opportunity to the youngsters and fringe figures waiting for their chance to impress.

Three days on from a hard-fought 2-1 win at Tottenham, and with Southampton to visit Anfield three days later, Klopp is not likely to take any risks with his lineup.

Derby will certainly pose a threat, but they are seventh in League One and were held to a 2-2 draw by non-league Torquay United at the weekend, so a rotated squad should be trusted.

That could include full debuts for the young trio of Calvin Ramsay, Stefan Bajcetic and Bobby Clark:

If that is the case, Liverpool could set up like this:

However, there is potential for even more change, particularly if Klopp decides that no risks should be taken with Henderson ahead of the World Cup.

Meanwhile, Lijnders posed the question in his press conference of: “Can you imagine a Scouser scoring in front of the Kop again?”

While not likely to have been literal, there is certainly one such option in the academy ranks in Layton Stewart, who has seven goals and three assists in 11 games for the under-21s this season:

It may be less probable, but that would bring this setup:

At this stage, the Carabao Cup could be seen as either an untimely distraction or a much-needed break, but either way it certainly gives opportunity to those who haven’t had many so far.

Derby cannot be underestimated, but Wednesday night should bring a chance for the likes of Bajcetic, Clark and Oxlade-Chamberlain to catch the eye.