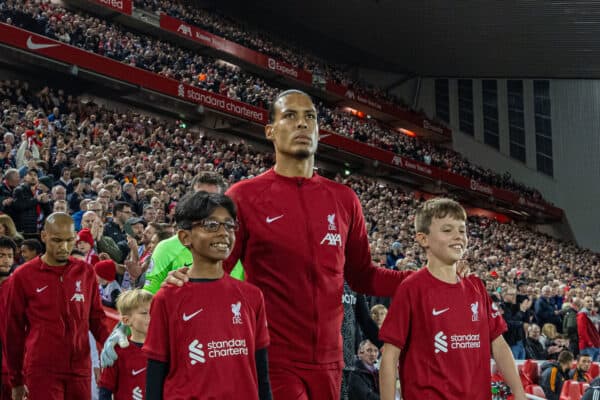 After a relentless and rollercoaster October, Liverpool now have four games in the space of 12 days before the World Cup brings the season to a halt.

Jurgen Klopp‘s side had a number of highs over the last month, securing their place in the last 16 of the Champions League and notching a victory over Man City against the odds.

But it was also a time that was not short on lows, with three defeats in the Premier League leaving the Reds closer to the relegation zone than the top four.

There’s little they can do about that now but they have two more league games to set it straight before the World Cup break, in addition to a Carabao Cup tie and their final Champions League group game.

Here are the key dates for your diary in November, which includes first team, women’s and academy fixtures.

The month starts with the visit of Napoli in the final group game in the Champions League.

Both teams have already guaranteed their place in the last 16 and the Reds could still secure top spot in Group A, but would need to win by four or more goals to do so.

It will not be an easy task as Napoli are unbeaten in 17 games this season and showed what they can do to Liverpool in the 4-1 defeat back in September – and Klopp will be expected to rotate his side.

It’s then time to get on the road in the Premier League, with an inconsistent Tottenham playing host in a match that twice ended in a draw last season.

Antonio Conte’s side have been hot and cold throughout the season with back-to-back defeats against Man United and Newcastle followed up by a late comeback win over Bournemouth in their final league game before Liverpool’s visit.

Despite their inconsistencies, they currently sit third in the table with 26 points – 10 more than the Reds – the gap cannot be allowed to grow any further.

Liverpool will find out their opponents for the Champions League last-16 when the draw takes place next Monday, November 7.

The following midweek sees Carabao Cup action return as Liverpool start the defence of the trophy, with League One Derby County the opposition in the third round.

The match should see Klopp ring the changes, with a full Calvin Ramsay debut to be on the cards, and the likes of Caoimhin Kelleher, Stefan Bajcetic, Alex Oxlade-Chamberlain and Bobby Clark will be in the plans for the XI.

The two teams have met once before under Klopp, in the same round back in 2016 – Liverpool won 3-0 thanks to goals from Ragnar Klavan, Philippe Coutinho and Divock Origi.

The fourth and final game of the month, and the last competitive Reds match for six weeks, sees Klopp’s side host Southampton.

From here, members of the team will jet off to be with their national sides while others are handed a mid-season break, leaving no exception but to give it their all against Southampton.

The Reds have won nine of the last ten meetings.

From November 14 until December 26, there will be no Premier League action thanks to the World Cup – leaving Liverpool on 14 games played until Boxing Day.

That’s six weeks without league football and, yes, the fact the World Cup is being played at this time of the year remains a diabolical decision, as does the location of the tournament.

Final squads for the tournament will be expected to have been announced by this date.

The first match of the World Cup is Qatar vs. Ecuador – exciting, we know – and the tournament is likely to see at least five Liverpool players feature – fitness permitting.

England’s Joe Gomez and Trent Alexander-Arnold, Spain’s Thiago and Brazil’s Roberto Firmino are in with a chance, as too Ibrahima Konate (France).

But there are at least 13 senior players who will make up the core of the squad who will train in Dubai in early December, with friendlies lined up against AC Milan and Lyon.