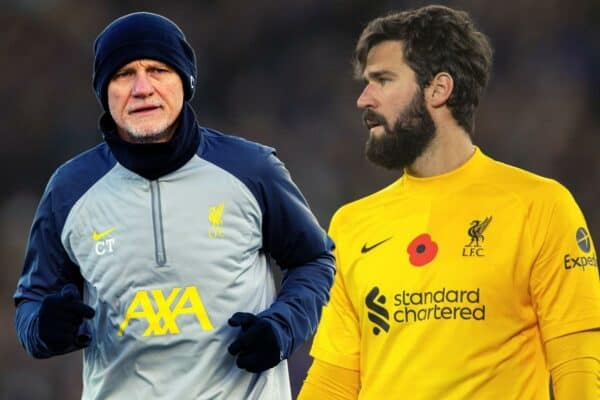 Legendary Brazilian goalkeeper and now Liverpool coach, Claudio Taffarel joined the club nearly one year ago and it’s safe to say Alisson is thriving under the watch of one of his idols.

Taffarel was confirmed as a member of Liverpool’s backroom staff last November, joining head of goalkeeping John Achterberg and his assistant Jack Robinson.

The trio have worked in tandem with the Reds’ goalkeeping group, with Taffarel playing an important role in assisting the development of Liverpool’s young ‘keepers.

Alisson had urged Taffarel to join years before he did after working together with the Brazilian national team, a role the 56-year-old continues alongside his work with Liverpool.

And the Reds’ No. 1 has now explained why he was so eager to have Taffarel at the training ground, namely to refocus on the Brazilian technique after years in the European system.

“When I signed my new contract with the club last year, I had won the goalkeeper of the year already, and every trophy possible, but I still wanted to improve,” Alisson told Sky Sports.

“That’s still the case now. I’m only 30, so I have a long way in front of me, and bringing Tafa, together with John and Jack, has given us a really good mix.

“Now, having them together with Tafa, is something amazing. Then, me and Tafa, we are now friends as well.

“I admire him in every way possible. I can see him as a friend, as a goalie coach, as a legend, and as a family man.

“The main reason I wanted to have him here was because of the methodology of goalkeeper coaching in Brazil. It’s something that I grew up with, but it changed when I came to Europe.

“When I went to Italy, it changed from Brazil, and when I came to England, it changed from Italy. There are some similarities, but I always felt that I wanted to have that kind of training back.

“Brazilian goalkeeper technique, I feel, is one of the best in the world and we are good for a reason; because we have really good goalie coaches who work in a way that makes us improve every day, and not only in the technical aspect, but the physical as well.

“It is a really intense kind of work. I’m not someone who spends too much time in the gym. I like to do strength and power on the pitch with the ball. So, the way he works helps me on that as well.”

Alisson continues to reach new levels and the consensus will be that he is Liverpool’s player of the season so far, but the No. 1 knows he hasn’t done it alone.

“Even if the team is not performing at the very best, the fact that I’m doing this is because I have help. I cannot do things alone on the pitch. The players are trying, they are fighting together with me.”