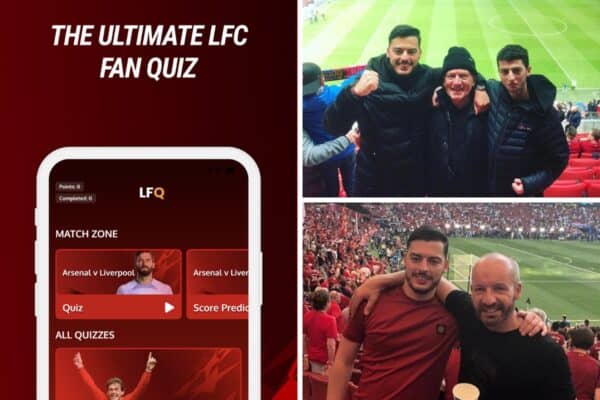 Fancy yourself as a quiz whiz and think you could name the only player in Liverpool history to score his only goal for the club in a cup final? Well, lifelong Red James Coleman has just the app for you.

Turning a passion into something more is a dream for many and for James, that’s Liverpool and quizzes – and Zoom is partially to thank.

LFQuiz is a new quiz app that tests your knowledge on all things Liverpool FC, it pits you against fans around the world and you can also go head-to-head with your friends and family.

Here, we get to know James and his love for the Reds, how the app came to be and the upcoming official launch at the Shankly Hotel on November 25, which you can attend.

My great-grandad was actually a Blue but he worked at sea for the majority of his life. My grandad and his three brothers had heard stories about The Kop from a young age and decided to walk to Anfield from Dock Road one day and that was that really, there was no looking back.

I’ve grown up with stories of my grandad and his brothers watching the Reds get beat away to Worcester City to then becoming champions of Europe, and my dad then telling me all about Keegan, Case and Dalglish.

My great uncle has got a barrier from the old standing Kop in his back garden, he won’t even wear blue jeans or drive past Goodison!

Being a Red is a non-negotiable in our family and I’ve got no complaints.

My first game was against Slovakian side Kosice in the UEFA Cup, in September 1998. I’d just turned six and my biggest memory from the game was the noise the old metal floor made in the lower Annie Road.

My dad and grandad claim I cried because of the noise every time we scored a goal, we won 5-0 so it was a long night for them!

What was your favourite memory and season supporting the club?

The fact I’ve had to think long and hard about this answer says it all about this football club, because there as so many memories to choose from.

The four standouts, though, have to go be: Barcelona 4-0, I was lucky enough to be at the game with my grandad and brother.

Then onto Madrid with my dad to watch us lift number six. I also booked a last-minute flight to Qatar to watch us become world champions for the very first time.

And last but not least, finally witnessing us lift the Premier League title with all my mates who I’d travel up and down the country with, in the Stadium Pub on Breck Road, is a night I’ll never forget.

But my favourite season was probably 2017/18, we didn’t end up winning anything but walking out of the ground in Kyiv, you just knew it was the start of something special under Jurgen.

LFQuiz then, how did it come about?

I lost my job at the start of the pandemic, and like most people, I struggled with not having a routine or having anything to do.

Zoom quizzes became a bit of a thing, so to pass some time I put on a few LFC-themed quizzes with my friends and family. I got a bit of a buzz from doing them and got some really good feedback.

I was in and out of work throughout the pandemic, and even when I was at work I’d be researching all things LFC and thinking of questions so around the start of 2021 I decided to take the jump and create LFQ.

Ah, Zoom quizzes, we all remember them, what’s the most obscure question you’ve come up with? Give us a tough one for the readers to work out here…

The three things I’ve found out that have surprised me the most off the top of my head are:

Graeme Souness was never sent off for Liverpool, Kenny Dalglish scored 172 goals but never took a penalty for the Reds, and despite being the club’s all-time appearance holder, Ian Callaghan was only booked once in his 857 games for the club!

A question for the readers… Can you name the only player in Liverpool history who scored his only goal for the club in a cup final?

Not half! What was meant to be a couple of months off work, turned out to be about 18! Twelve to fourteen-hour days researching and creating over 7,000 questions, as well as trying to find the right company to build the app itself, was harder than I expected.

I was keen to use local businesses to start up the app and brand, a good mate of mine Andy Jones was the first person I told about the idea and he put together all the graphics/designs for me, and a local company called Pixel Beard have helped build the app itself.

What’s the reaction been like? Are fans from around the world getting involved?

The initial reaction has been really positive, the app is just shy of 1,000 users after a month since launch and is played in around 50 countries, across all continents.

It’s mad sitting in my living room in Aintree seeing the app being used in places like the USA, Indonesia, Brazil and Australia, just to name a few!

And you have a first in-person event coming up this month; tell us about that…

I did a bit of a soft launch night a while back with friends, family and people who have helped the app along the way, and it was a really good night.

I’ve had a lot of people asking me at games to put on a night, but with us playing every game possible last season there wasn’t much room to squeeze one in!

Now with the World Cup being on I just saw it as a good opportunity to finally put one on, give people a bit of a Liverpool fix and maybe sneak in a pint or two.

Finally, then, let us know where and how to download the app…

The ‘LFQ: Liverpool Football Quiz’ app celebrates its official launch with a quiz night at The Shankly Hotel on Friday, November 25 at 6pm.

You can buy tickets for the event here.