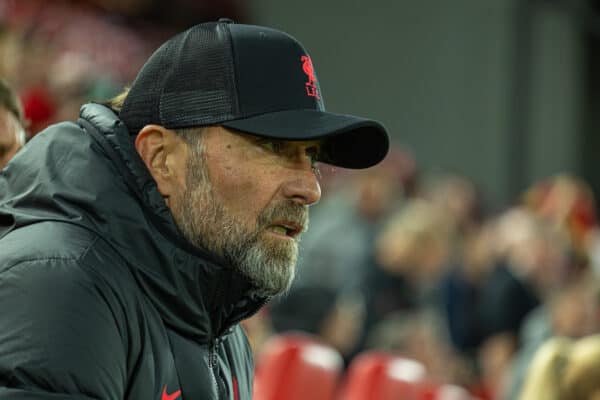 After Liverpool concluded their Champions League group campaign with a 2-0 victory over Napoli, Jurgen Klopp explained his decision to change the Reds’ formation once again.

The boss opted to revert to his tried and trusted 4-3-3 system for the visit of Luciano Spalletti’s side, having also deployed a standard 4-4-2 and a 4-4-2 diamond in recent weeks.

It was a move that paid off, with Liverpool looking much more compact against a Napoli side who hadn’t lost a match in Serie A or in Europe ahead of this game.

And the Reds’ improved defensive cohesion was something Klopp highlighted after the match, with the boss pointing out that 15 points from a Champions League group stage campaign was an “absolutely insane” achievement.

“Being compact makes all the difference,” Klopp told BT Sport.

“All of a sudden we have challenges in the right places and we are difficult to play against. If you see what Napoli is able to do at the moment, it was a really good game from us, in our situation, in our moment, with a few issues.

“The boys played a good game. A lot of courage, bravery. Go in the challenges, make a proper fight of it, and two set pieces bring us the three points. 15 points in the Champions League is absolutely insane.”

In his press conference, when asked to elaborate on why he decided to move back to the 4-3-3 system for this game, Klopp said he felt it could offer his side more defensive solidity.

It will now be interesting to see whether Klopp sticks with the same formation for Sunday’s trip to Tottenham.

“It’s always on the table for us, it doesn’t mean we will play it from now all the time. Offensively it’s obviously not a problem, there’s no difference to a diamond really, but defensively there’s a big difference. We have to figure out what’s best for us depending on which players are playing.

“We will see what we do against Tottenham, this system was never off the table. We had to change a little bit and give ourselves an impulse and feel the defending stuff again in a new way.

“That’s the only positive thing so far this season, that we played and won in different systems. Not often enough, but at least a couple of times.”