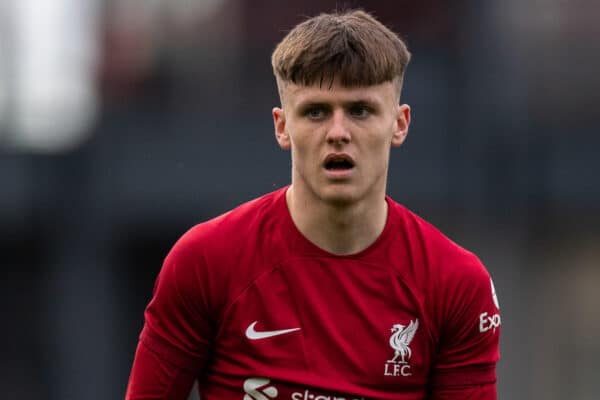 Ben Doak assists and Mateusz Musialowski starts in U21 internationals

Ben Doak added another assist to his tally on his third outing for the Scotland under-21s on Thursday, while Mateusz Musialowski also saw action.

Ahead of his side’s clash with Iceland during the mid-season break, Scotland U21s manager Scot Gemmill explained how Doak has been “fast-tracked” through the age groups.

Jumping from under-17s to lining up against players four years his senior is not new to the 17-year-old winger, of course, as he has also done so with Celtic and now Liverpool.

But the manner in which he performs when making the step up is hugely impressive, with Doak assisting again in a 2-1 defeat on Thursday evening.

It came in his first start at U21s level, laying on the opening goal at Fir Park after a smart interchange with Max Johnston, beating two players before cutting back for the right-back to fire home.

Doak had opportunities to add a goal, too, but found himself frustrated by goalkeeper Adam Ingi Benediktsson, as Iceland turned the tie around to take victory.

That makes it 10 goals and eight assists in 19 games at all levels so far this season, with Gemmill relishing how he “did it again” as he spoke to reporters afterwards.

“We’re all very confident of the potential Ben has but he still has to go and do it. Credit to him, he did it again,” he told the Scotsman.

“He’s disappointed he didn’t score and he’s on the treatment table after taking a sore one.”

Hopefully it isn’t a major issue for Doak, but there is still plenty of time until Liverpool’s training camp in Dubai either way.

The teenager wasn’t the only Liverpool youngster in action on Thursday, with Musialowski making another start for the Poland under-21s as they took on Croatia in Pula.

However, it was a disappointing night for the 19-year-old forward, who was brought off at half-time in a game that ended 3-1 to Croatia.

And Caoimhin Kelleher watched on as an unused substitute as the Republic of Ireland endured a 2-1 defeat to Norway in their friendly in Dublin, with Gavin Bazunu preferred.