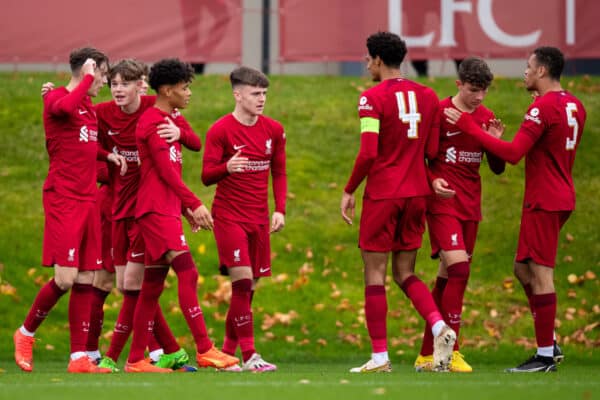 It was another star performance from Ben Doak as the Liverpool under-19s thrashed Napoli 5-0, booking their place in the UEFA Youth League last 16.

With more than a foot in the last 16 already, the young Reds hosted Napoli looking to ensure their progress and avoid a potential playoff.

There was little chance of that, with Liverpool in control from the off in a dominant display as Doak shone yet again in his role on the right flank.

The Scot produced the first real flashpoint of the tie with a bright one-two with Melkamu Fraunedorf before whipping the cross in for Lewis Koumas, who was unable to convert.

Koumas did open the scoring just before the half-hour, though, benefiting from a stroke of luck as Frauendorf attempted a shot which deflected in off the striker’s back.

It was a deserved lead for Liverpool, but the floodgates only truly opened after the break.

There were four more goals to come in the second half, with the outstanding Doak kicking off the scoring as he picked up the ball near the byline, beat his man and blasted home from a tight angle.

Doak then laid on another for Luke Chambers five minutes later, again twisting through challenges to find himself on the edge of the box, with a simple pass to the left-back before a touch and finish from range.

Liverpool’s inspiration then shifted to the left flank, from where Trent Kone-Doherty netted a quickfire double.

The 16-year-old from Derry got his first with a determined follow-up on the rebound, then another through a twisting run before blasting in.

By then, a place in the last 16 had long been assured, with Marc Bridge-Wilkinson able to shuffle his pack with the introduction of Tommy Pilling, Francis Gyimah and Ranel Young.

With the young Reds through to the next stage, then, they can plan for a one-legged knockout tie at the end of February.