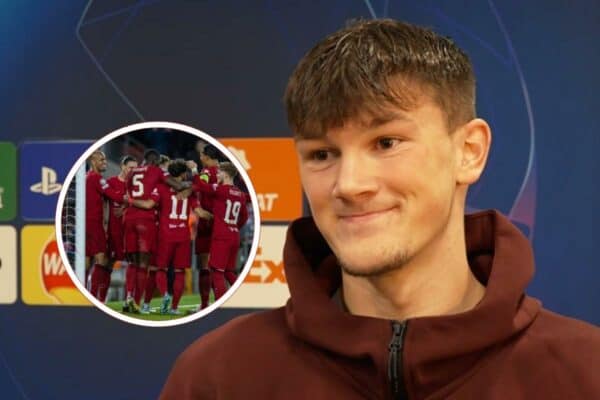 After an 18-game wait, Calvin Ramsay finally made his Liverpool debut in the closing stages of the win over Napoli, a moment he won’t forget any time soon.

The 19-year-old’s arrival at Liverpool was derailed by injury on the very first day, a setback that required patience, leading to nearly three months on the sidelines.

A few games with the under-21s proved valuable and on Tuesday, against Napoli, his number was finally called by Jurgen Klopp to make his senior debut.

Ramsay may have only been introduced in the 87th minute, with seven minutes then added on, but the moment was “special” for the right-back, whose family was present at Anfield.

“Delighted to get three points and to come on and make my debut in the Champions League is a special moment,” the Scot told LFCTV.

“To have my family here, as well, makes it even more special so I’m delighted.

“I was a bit nervous, to be honest,” the 19-year-old admitted. “Since I came to the club I’ve been injured, but I’m just delighted to be back now.

“I played a few games with the under-21s to build up my fitness so to be back in the first team squad, to come on and my family there – a moment I won’t forget.”

Ramsay made 39 senior appearances for Aberdeen before his move to Liverpool in the summer but had never played in the Champions League fixture, ensuring Tuesday night was “a dream come true.”

“It’s hard [to describe], to be honest,” Ramsay said of being on the pitch. “It’s just a dream come true, something I’ve dreamt of since a little kid.

“To actually be playing in the Champions League, it’s just amazing.

With League One’s Derby the visitors in the Carabao Cup next week, Ramsay will certainly be in contention to make his full debut in the penultimate match before the World Cup break.