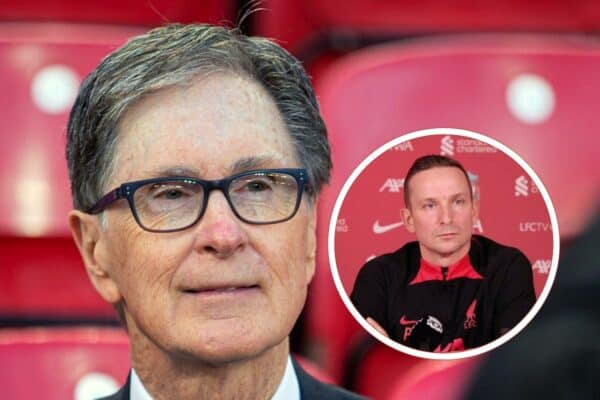 Pep Lijnders spoke in depth on Liverpool’s owners Fenway Sports Group in a captivating press conference after news broke of their intentions to seek new investment.

Liverpool Football Club has been thrown into the spotlight, this time for the happenings off the field after a statement confirming FSG’s desire for new investment.

Reliable sources report a full sale is on the table, whilst FSG’s public comments pertain to simply being open to third-party investors.

As the designated spokesperson ahead of Liverpool’s Carabao Cup meeting with Derby on Wednesday, Lijnders was the first to be asked about the situation.

He spoke in-depth in a captivating manner, as always, and here is his every word on FSG, the recent reports, his relationship with the owners and their investment into the squad and club.

“First of all, everybody who saw us in the last years, everybody who realised who we are as a club, know we have a strong relationship with the owners,” he began.

“There was a small discussion, a little bit of talk between Jurgen and me, but from that moment on we start focusing.

“As I said, they are acting in the best interests of the club. They try to take the club forward, I believe they always did.

“For me, they are good owners and I will explain a few reasons why.

“First one, they tied down one of the best managers in the world, for seven-plus years. I think that says a lot.

“Second, they tied down the best players in the squad.

“The difference between European-top or world-top or sub-top is that you have to sell your best players. We tied down Mo Salah to a contract.

“And then, what’s even more important in my opinion is we have a stable academy.

“They invested in the academy, they invested in where we are sitting now [AXA Training Centre], one of the best training grounds in world football in my opinion.

“It’s our new home and it was not easy to replace Melwood, but we are sitting here, and we are feeling at home.

“They invest in this, then of course the Main Stand, the new stand [Anfield Road End], they made a lot of good decisions.

“If they were not good owners, we would not be sitting here, because in the end we won a lot of cups, a lot of international and national prizes.

“That’s what I say, I believe they are acting in the best interests of this club, to take it further.

“I feel that it is again speculation, no [if they’re here for the long-term] because they are searching for investors. I think the statement was really clear, to be honest.”

Coaches signed a new contract in April, was it under the impression of a long-term relationship with FSG?

“We signed a deal with Liverpool Football Club and the owners, but we are not naive to think that things don’t change in football,” Lijnders explained.

“That’s how the football world works.

“As I said, our relationship with them is very, very good. I respect them so much, you have no idea.

“I hope with my answers I can translate that.

“Everything that I know is what you guys know. I should ask you guys the question because it’s in the statement, it says very clear that they are searching for investors.

“What I said, what I like about this club and about our structure is that we’re used to the rumours around.

And criticism of owners not spending enough

“One influences the other. If you buy a lot, young players don’t get a chance but there is also the type of player you want to buy,” Lijnders said.

“I think we invested well.

“I think if you look to our last [few] years, we bring Luis Diaz in the winter.

“It was a massive signing and was needed, I said it was like water in the desert to give this last push towards the cups.

“A proper striker, an addition to what we didn’t have, that type.

“Then you have Calvin [Ramsay], Fabio [Carvalho] – young players who come in as signings – before that, Ibou Konate, [Diogo] Jota.

“There are all are signings that hit the bullseye.

“We have to be right and that’s what we search for.

“Then you cannot be left, right, left, right – no, you want to be right.

“With time what was most important, and that’s what I tried to explain, was to tie down our best players because our team is and was a machine.

“If you don’t tie them down they will leave so what I’m saying is, it’s a balance.

“You need to be right with your signings and I believe we were right. Do people want to see one, two, three or four more players? Of course.

“Everybody in the outside world wants to see [that].

“Add academy, give talent a chance and buy the top one who immediately influences the first XI, like Luis [Diaz], Jota, Ibou, Kostas.

“I think we invested but what people want to see is that transfers is the one thing but building a club and a long-term successful relationship has much more to do than just transfers – otherwise we would not be sat here.

“Tie down Jurgen Klopp, for seven-plus years, that may be even more important.”