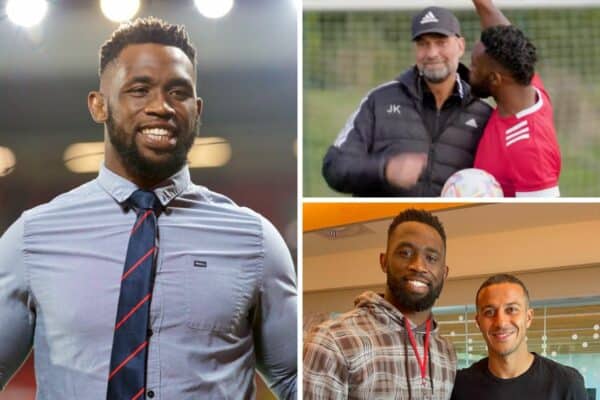 Siya Kolisi couldn’t help but burst into song at the very first mention of his favourite Liverpool midfielder.

Throughout our exclusive interview with South Africa’s Rugby World Cup-winning captain, we got the impression that he would happily have spoken about his affection for Liverpool FC all day.

Kolisi, who was first attracted to the club when watching Steven Gerrard on TV as a youngster, had a chance meeting with Jurgen Klopp shortly after his World Cup triumph in 2019.

Since then, he has developed a special bond with the Liverpool boss and also had the opportunity to meet more of his Liverpool heroes at the AXA Training Centre earlier this year.

Kolisi has achieved so much in his own sport, but the excitement in his voice when he speaks about his love for all things LFC is truly refreshing.

“I love Thiago. All the guys, when I go there, as much as I’m a fan, they make you feel like family,” he tells This Is Anfield.

“I remember walking around and seeing Andy Robertson, who was still injured at the time, how he just stops and has a conversation, and Kelleher as well, who was also injured. It was great.

“It was the first time we’d seen Thiago. And when Mane was there too, he signed boots for my foundation to raise money, because he’s big on making a difference in communities.

“It’s just special how they are, and you can see through the coach too, they’re all the same, they all have the same mindset. The values and the culture, it’s really amazing. It’s always special to go there because they make you feel welcome.”

Meeting Klopp outside a bathroom!

Kolisi’s reaction when he happened to spot Klopp walk into the bathroom in a Cape Town restaurant was the same as it would be for any Liverpool supporter: shock, excitement, disbelief and delirium.

As he waited outside for his hero to emerge, little did he know that this would be the start of a brilliant friendship.

“I was in Cape Town in a restaurant. We were just chilling there with some of my friends and my wife, and coach walked past our table,” he explained.

“He went to the bathroom and I freaked out! My wife and friends didn’t understand why I was going crazy.”

Kolisi rang a mutual friend to help explain who he was to the Liverpool boss, but he needn’t have bothered.

Klopp was as accommodating as ever and an hour-long chat resulted in an invitation to a game at Anfield.

“He said ‘I know who you are, we actually watched the (rugby union) World Cup final’, because obviously some of the English players were watching and supporting England,” Kolisi continued.

“Then he came to my table with his wife and his friend, and we sat for like over an hour just chatting, and then he invited me to come (to Anfield) whenever.

“So I booked the flight a couple of days later and I went to Anfield, and it was just next level.”

The South African’s dreams came true when he attended the Reds’ Champions League meeting with Napoli in November 2019.

There, he met Klopp again and was invited into the dressing room to speak with the players.

Most recently, the pair filmed a ‘Klopp x Kolisi’ video campaign for Adidas, where their heartwarming relationship is clear for all to see.

Fitting, then, that they also happen to share a birthday and have exchanged messages on that day each year since their first meeting.

After the shoot, Kolisi was invited back to Klopp’s house for an evening with him and his wife.

“We send each other birthday messages every year on June 16,” the South African says with a beaming smile.

“He’s a friend now, he’s a really good friend. I’m a big fan, but he treats me like a friend. He’s such a good human being, his wife is amazing too.

“We did the shoot together and it was so natural because of the friendship that we have, and then he welcomed us to his house. We chilled the whole night and we were just speaking about how he sees football, his mindset as a coach.

“The club was going through a difficult period at the time, and just speaking to him about that and learning a lot from him was amazing.”

So what did he make of Klopp’s skills with the rugby ball?

“He can kick it well, but the passing and everything, he has no skills at all!”

“I really do cherish him, and I learned a lot from him in the time that we spent at his house. How he sees life and sport in general, it’s really great.

“That’s why the team plays for him. He cares for the human before anything else. And those hugs that he gives his players, it’s real, that’s the best thing about it, it’s so real. He’s a perfect guy for the team I think.”

Inspired by another captain

Klopp isn’t the only individual at the club that Kolisi is now lucky enough to call a friend.

The 31-year-old first met Jordan Henderson at the Napoli match he attended three years ago and the pair have kept in touch since, with Kolisi inspired by the ups and downs of his Liverpool career.

“I actually wrote about Jordan in my book, just about his story at Liverpool,” Kolisi said.

“How he wasn’t wanted at one stage by Brendan Rodgers, how he stuck through it and stayed, and now look at the leader he has become, that inspired me quite a lot, because I also went through difficult periods in my life, and I think him staying and fighting through it was really special.”

Nowadays, in-between his busy fixture schedule for club and country, Kolisi watches every Liverpool game he can.

“The whole team,” he said when asked to single out his favourite players in the current team.

“I love Alisson. Mo, who I’ve met, amazing guy. Virgil, I haven’t spent a lot of time with him because he’s always training or he’s not there, I think he’s amazing. I think Nunez is coming into his own and I think he’s going to be amazing (too).”

And while his duties in rugby are very much about performing on the pitch, he also very much values the responsibility of being a Liverpool supporter, in what has been a difficult season for the Reds to date.

“I know we haven’t started like we normally do. We’ve had a lot of injuries, that’s what people forget, we haven’t had a full squad, and I think it’s going to come right.

“It’s the same players, bar one or two that are not there, that have achieved all these amazing things for the club, and I think for us as fans we have to keep encouraging them.

“As a sportsman, I know how it is. Sometimes it goes like this, and what I love about our fans is that they’re still there, they’re still supporting the team.”

By forming a close relationship with Klopp and a number of players, Kolisi has achieved the dream of so many Liverpool supporters, but in the coming years, he hopes to make another one come true.

Kolisi has become a big admirer of Reds’ musician Jamie Webster, and says he hopes to one day attend one of his concerts alongside other Liverpool supporters.

“It’s one of my dreams to be there,” he reveals.

“I would have loved to go and sing outside the training facilities, bring a guitar with Jamie Webster and just sing outside, because they need our support more than ever.

Optimism to be admired, and as a sportsman who has gone through so many highs and lows in his own career, who could doubt him?

* Watch our exclusive interview with Siya Kolisi in full here.