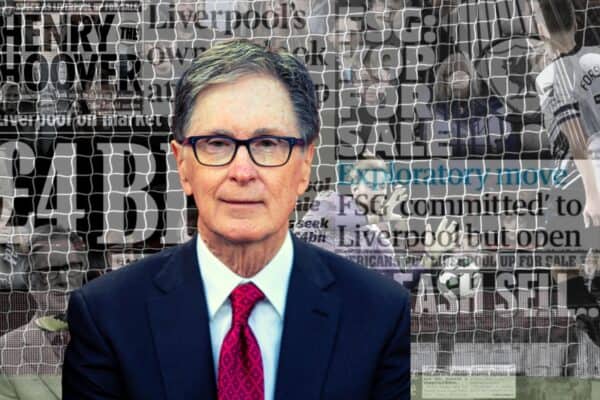 It seemed quite apt that Liverpool were taking to the pitch in the name of the League Cup during a week in which the long-term commitment of FSG to their ownership of the club came into sharp focus.

When Liverpool won the 2012 League Cup within FSG’s first full season in control, alongside reaching that year’s FA Cup final, it wasn’t deemed a good enough return to stop John Henry from sacking one of the club’s biggest legends.

Within the slipstream of the Hicks and Gillett era, this marked another path deviation toward Liverpool becoming infinitely less Liverpool than they once were.

A decade later Liverpool were winning the League Cup again, the first component in what was eventually an unrequited love letter of a season to a projected quadruple that fell two elements short. The two biggest elements at that.

Still, despite the body blows of May provoking a hangover on the pitch as the formative months of the 2022/23 campaign continue to lumber along, in financial terms the club has never been so healthy.

According to the latest monetary contemplations of Forbes, FSG’s £300 million spent in 2010 had matured in 2022 to a ballpark figure of £3.6 billion. In the last 48 hours or so, talking heads on these matters have suggested that on the open market Liverpool could fetch anything up to $7 billion US dollars.

Not perfect but not all bad

Solid custodians to some, to others FSG are a set of Fedora-wearing shysters.

On one hand, under their leadership they hired Jurgen Klopp, our 30-year league title drought came to an end, the Champions League was won, and we even became champions of the world; added to this, the Main Stand has been impressively rebuilt, and the Anfield Road end is mid-rebuild.

Walk away in the near future and FSG can point to half the stadium having been renewed, while Liverpool’s corporate and commercial ventures have been significantly sharpened since the days when you couldn’t purchase a Champions League-winning tracksuit top within the immediate afterglow of arguably the most iconic event in the club’s history.

At the other end of the spectrum, FSG have often, and fairly, been accused of not being bold enough in the transfer market when at the apex of their on-pitch fortunes. In Klopp, they procured the services of the golden goose of football, yet have they really given him everything they could? No, they haven’t.

Errors of judgement have never been too far beneath the surface. The £77 ticket, copyright of the club’s name, furlough of staff, and the Super League have all been embossed with the fingerprints of FSG.

As serial offenders in this respect, there will be a litany of other questionable plans that have never reached the light of day, and that we may never get to hear about.

Everything about FSG comes laced with Yin and Yang. A respectable veneer offset by an opportunistic underbelly, suspicion abounds about their motives, yet the shoulders ease that they don’t have blood on their hands. We are the nest egg of hedge fund merchants, but at least we aren’t part of the sports washing industry yet.

Trepidation for the future

It makes for a peculiar landscape for the fanbase. There is an anti-FSG element, an element that is never audible at Anfield on matchdays, nor seen taking to the streets in protest marches.

It is arguably more of a social media movement, where any positive noises made are met with accusations of being a puppet for the owners, or an FSG fanboy.

Nobody idolises FSG, though. In reality, most of us have our frustrations about them but are also happy with a situation in which they aren’t overly hands-on, letting football people get on with football jobs.

Moneyball, net spend and all that. Put the right people in pivotal positions of influence and reap the dividends. What the pre-FSG Liverpool lacked was basic core expertise where it was needed the most. Love them or loath them, FSG are stunningly adept at doing the basics well.

This in itself is something about them that draws parallels to the Liverpool of the past. John Smith and Peter Robinson were magnificent men in suits for a club where the boardroom was always of little interest to supporters, managers, and players. Bill Shankly was always of the mind that directors were only there to sign the cheques.

There was another side to this though, as every Liverpool manager was pressed into propelling their own funds at times.

Three upturned cups on a table, place the ball beneath one and watch as they are rearranged. Where is the ball? While one hand is handing out the cash, the other is stuffing other banknotes into their pockets.

Liverpool have never been a big spending entity, and to be honest, whenever we have tried to be one, we haven’t been particularly good at it. We have always sold Peter to pay for Paul. As the mantra goes, Klopp swept Virgil van Dijk and Alisson through the Anfield arrivals lounge only because Philippe Coutinho had agitated his way through departures.

This wasn’t unique ground, however. Liverpool had been here before. They didn’t break through the £200,000 barrier until 1974, only doing so because an even larger fee loomed from Larry Lloyd’s move to Coventry City.

Beyond that, Bob Paisley was only permitted to spend a then British record transfer fee, £440,000, on Kenny Dalglish, because the club had procured an even higher fee for Kevin Keegan, while the creation of the magnificent triumvirate of John Barnes, Peter Beardsley, and John Aldridge was covered by the money accrued for Ian Rush.

They didn’t even break through the £1 million mark until 1987, just five years prior to the advent of the Premier League.

Liverpool have always been at their best when counting the beans and that is an ethos that has suited FSG’s requirements down to the ground. As much as football changes, the more it stays the same.

Any fears about a potential exit of FSG aren’t grounded in the loss of them as an entity, more the trepidation about what the alternative is.