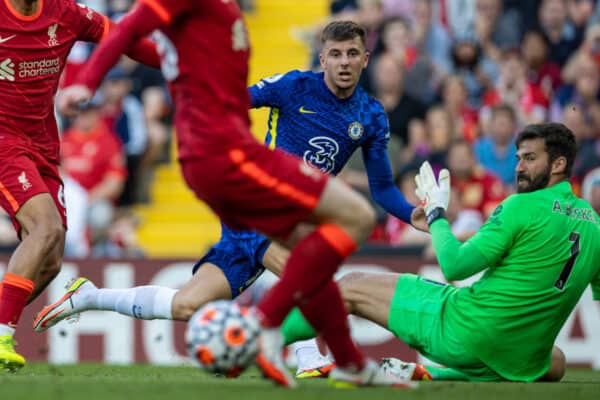 With Liverpool expected to add to their midfield ranks in the summer, Mason Mount has emerged as a surprise candidate amid his Chelsea contract talks.

At the end of this season, Jurgen Klopp could see James Milner, Naby Keita, Alex Oxlade-Chamberlain and Arthur all depart the club.

It would come as part of a much-needed overhaul of his midfield, leaving Thiago, Fabinho, Jordan Henderson, Harvey Elliott, Curtis Jones and a crop of high-potential youngsters.

“But around [that youth], from time to time, you have to throw in proven quality,” the manager explained earlier this month.

Liverpool are known to be targeting at least one midfielder as they head into 2023, with Dortmund’s Jude Bellingham the priority as he prepares to depart Germany.

But the Guardian‘s Jacob Steinberg has now claimed that the club are “keeping track” of Mount as there is “growing uncertainty” over his contract at Chelsea.

“Mount’s deal expires in just over 18 months and his situation has prompted clubs to check whether he could be lured away from Stamford Bridge,” Steinberg writes.

“The 23-year-old has been in discussions with Chelsea since the summer and, with no sign of a breakthrough, negotiations are not expected to resume until January.”

Along with Liverpool, Juventus are also named as an interested party, while previous links with Man City are brought up again.

On face value, it seems highly unlikely that Mount would end up a Liverpool player, with it more feasible at this stage that Steinberg’s report is simply agent talk.

The England international has been with Chelsea since the age of six, and it is difficult to see him moving elsewhere, with it more realistic that these claims are an attempt to force the club’s hand.

Chelsea are said to have “no interest in losing Mount” and “remain optimistic that negotiations will end on a positive note.”

However, it is added that “there have been indications that an agreement is not guaranteed,” and with Mount currently “one of the lowest earners in the first-team squad,” the club’s offers so far have “fallen below his expectations.”

There are conflicting reports from The Athletic‘s Simon Johnson this week, with there claimed to have been a “positive breakthrough” in recent talks.

At this point, it is not likely that Liverpool will push through a deal for Mount, though Klopp is certainly an admirer and his homegrown status would be a bonus.