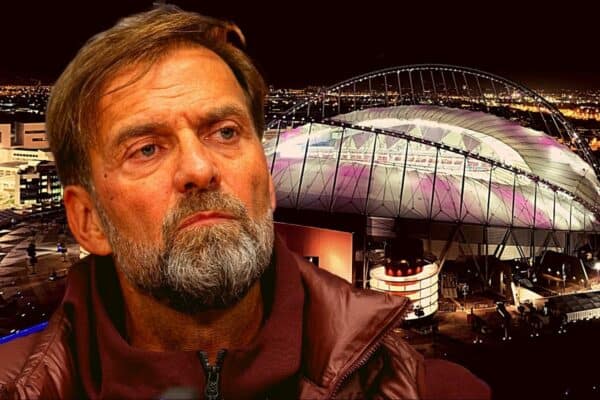 Jurgen Klopp has confirmed he will not attend the World Cup in Qatar, but insists players should not be used by the media as political symbols.

Despite his anger over the tournament’s timing and, more importantly, the human rights issues in Qatar, his message when it comes to the players is simple.

During his pre-match press conference for Liverpool’s trip to Tottenham, Klopp grew heated as he was asked a number of questions on the World Cup, turning down the opportunity to attend in favour of a mid-season holiday.

The manager admitted that he was not looking forward to the tournament as much as he usually would, saying: “I will watch the games anyway, but it’s different.”

“I watched an old documentary about the whole situation, when it got announced that Russia and Qatar are the places for the next two World Cups,” he explained.

“I think it was the first time in history that they announced two in one [go].

“The whole situation around, we all know how it happened.

“No legal thing afterwards really led to [the reality being uncovered], that ‘now it’s open, now everybody knows’. It was still hidden everywhere and you think ‘wow, how could they?’.

“It’s 12 years ago I think. Then now it’s coming. It’s nothing to do with Qatar, they won the World Cup [hosting rights] and now it’s there.

“The moment they put it there, all the things that followed up were clear.

“The people at that time, everybody involved should have known in that moment that we, later on, would talk about human rights, in a sense of people having to work there in circumstances which are, to put it nicely, difficult.

“So we couldn’t play the World Cup there in the summer because of the temperature – it’s now pretty hot.

“There was not one stadium in Qatar, or maybe one, so they had to build stadiums. Nobody thought about that, I don’t think anybody mentioned that that day.

“So somebody has to build them, because they don’t just [appear], ‘oh there’s a new stadium’. That’s the situation.

Klopp made headlines on Thursday evening for his comments on the political landscape surrounding the tournament, and how players should not be expected to make statements on the many issues in Qatar.

He went on to elaborate on this in reference to the England national team, with Gareth Southgate attracting criticism for his attempts to avoid the situation in a recent interview.

“Again, I watch it from a football point of view, and I don’t like the fact that now players, from time to time, get in a situation where they have now to send a message,” Klopp added.

“You are all journalists, you should have sent the message. You didn’t write the most critical article about it.

“Not because it’s Qatar – no, because the circumstances. It’s clear. That’s how it is.

“But now telling players to wear this armband, or if you don’t do it then you are not on their side and if you do it you are on their side…

“No. It’s footballers. It’s a tournament. We have to organise it. Players go there and play and do the best for their countries – nothing to do with the [political] circumstances.

“I see already in interviews all the time, ‘how is it being here?’ and all these kinds of things. That’s all not OK for the players, I really have to say.

“It’s a tournament, we all let it happen that it’s there and that’s fine, because 12 years ago nobody did anything.

“We cannot change it now, go there.

“There are wonderful people there as well, and it’s not at all that everything’s bad. It’s just how it happened was not right in the first place.

“If you want to write something else about it, then do it – but by yourself, without asking us and all these kinds of things and ‘Klopp said’ and ‘Southgate said’. As if it would change anything!

“You [journalists] all, more than I, let it happen 12 years ago. How is it possible that in that time it was [only] a story that it happened?

“Then it was already clear what would happen.

“There would have been plenty of chances afterwards, like in the next three, four years, to say ‘by the way, the process was not right, a lot of people took money for the wrong reason’.”