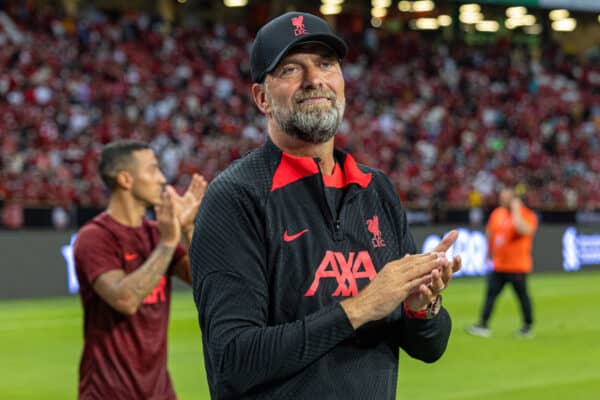 Jurgen Klopp has explained the plan to take the players not involved at the World Cup on a mini ‘pre-season’ in Dubai, with a “good number” available.

Liverpool are expected to head to Dubai at the end of November for a warm-weather training camp and friendlies against AC Milan and Lyon.

They will be without seven key players due to the World Cup and at least two others due to injury, but Klopp will be able to work with the likes of Mo Salah, Luis Diaz, Andy Robertson and Thiago.

It should be a productive spell for the Reds ahead of a renewed assault on four fronts in the second half of the season, with the manager pleased with the squad he can call upon.

“I’m happy about the number of players we have for our ‘pre-season’. That’s a good number, the positions are covered,” he told reporters.

“So that’s positive, of course, that’s how we use it.

“But not moaning about the players who are at the World Cup, no. I think it’s enough, to be honest.

“Enough players go and then we need them all back healthy, definitely. Because then it’s a really long season to come, a lot of games and it starts early.

“From that moment on there is no rest again.”

Due to the lack of time between the latter stages of the World Cup and Liverpool’s return game – with only six days between the semi-finals and the first possible date back – Klopp is likely to be missing players for the Carabao Cup fourth round.

The manager is already anticipating a period without those who make it through to the knockout rounds, but is aware that Man City, their opponents, have more than double the amount of players at the tournament.

Furthermore, Klopp explained one of the positives of Liverpool stationing themselves out in Dubai, which is only an hour-long flight from Qatar, as being able to accommodate for those knocked out early.

“We are in the training camp in Dubai, so that’s around the corner,” he said.

“So if somebody has to leave the tournament early, they can join us immediately. That’s one of the reasons why we go there.”

Klopp added: “If you only play three games now and go out of the group stage, then it’s no real problem.

“Then you still have time to train afterwards, rest a little bit and these kinds of things.

“If you go through to the final or to the semis, because they play for third place as well, then it’s really long, it’s a lot of games in that period.

“But it will not happen for everybody, somebody has to go out of the tournament in the end.”